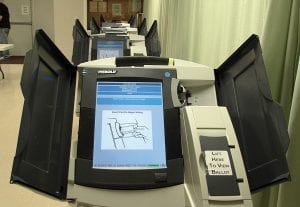 “Many folks in the township wanted to see some changes,” said Holman Lynch. “Anytime you’re dealing with someone else’s money.” She said she believed it was important for her to campaign door to door. “And, I enjoyed it,” said Holman Lynch. “ Many people didn’t realize there was a fiscal officer.” She said she believed Licking Township residents wanted to see better accountability for the township’s budget and better availability of updated minutes.

Also in Licking Township, incumbent trustee Joe Hart defeated challenger John Loudermilk 883 votes to 584. “Words can’t properly thank someone who puts confidence in you,” said Hart, “and allows you to serve them.” He thanked everyone who supported his candidacy and campaign.

In Hebron, Mayor Clifford Mason easily won a fifth term, defeating Patrick Taylor 389 to 173 votes. “I’m pleased and honored to serve another term,” said Mason. “I certainly want to thank the residents who supported me.” He also thanked his campaign committee.

Again, the incumbent prevailed in Union Township, where Trustee John Slater narrowly defeated challenger Charles Prince 1185 votes to 1160. “It’s pretty close,” said Slater, who said he wouldn’t be convinced of a victory until the provisional ballots are counted for the official election results. He believes the election could still go either way. “(Prince) would make a good trustee,” said Slater. “He’s educated and informed, but, obviously, I want to keep doing it, too.”

“We have some definite challenges ahead of us,” said Peterson, who won a third term after having served on council for six years. She said her first term was for two years due to a staggering provision in the village’s newly adopted charter. Previously all council members ran simultaneously. “I think it was a good move,” said Peterson. She said much of the Village of Buckeye Lake remains below the poverty scale, which is a challenge, and she wonders what effect Licking County’s reappraisal of property values will have. Peterson hopes the village can continue to secure grants.

In Bowling Green Township, Jeff Chorpenning who lost his bid for a second term two years by 14 votes to challenger Ben Hupp, bested long-time Trustee Donald Watkins by a 358 to 317 vote. Incumbent fiscal officer Jennie Duval was reelected with 481 votes. Patricia A. Volland filed as a write-in candidate. Write-in votes haven’t yet been tallied, but 49 of them were cast in the race.

In an issue that was the subject of a last-minute letter in last week’s Beacon, Franklin Township voters rejected two levies – one for fire protection and the other for roads and bridges. Each appeared on the ballot as a two-mill permanent replacement levy, but had been advertised by trustees as renewals. A handful of residents protested the misrepresentation and voters responded. The fire levy was rejected 519-336. It was the only fire levy out of eight in Licking Township that voters rejected. The roads and bridges levy went down 523-324.

In the only county-wide races, incumbent Municipal Court Judge David Stansbury won a full term besting Mark D. Gardner and Mike King. Stansbury, a Democrat appointed by former Governor Ted Strickland to replace Judge David Branstool when he moved up to the Court of Common Pleas, garnered 21,037 votes to 15,403 for Republican Mark Gardner and 7,933 for Democrat Mike King who was running as an independent. Voters soundly rejected a new .1 mill five year levy for soil and water conservation programs by a 31,576 to 20,547 vote.

Licking Township voters in Precinct D approved Sunday sales from 10 a.m. to midnight of wine, mixed beverages and spirituous liquor at the Jacktown Pub by a 343 to 186 vote.