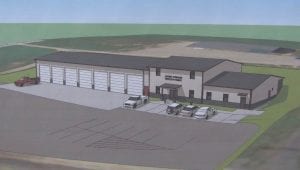 The first step is to remove the three-bay Station #3. Construction is to be completed by July 30, 2018.

The funds for the new station will come from estate taxes including a three million dollar windfall that trustees have been holding for some time. No receipts from the township’s fire/ EMS levies will be used.

Trustee John Holman and Fire Chief Mike Wilson will the township’s primary contacts for the construction.

“This is a new experience for us,” Holman said at Wednesday’s pre-construction meeting. “We’ve never been involved in a $2 million project. This is our township’s biggest ever commitment.” 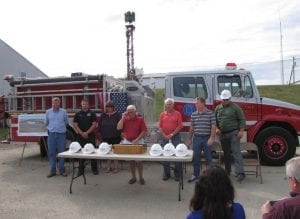 During the brief groundbreaking ceremony, Trustee President Joe Hart said the new station will be a “lasting legacy” for all the current and past fire company members. He noted that the station’s entire cost is being funded by several large estate tax payments and several bequests for a new fire station. “These special individuals will be honored by name at the dedication ceremony,” he added.

In recent years, runs have averaged about 1,100 a year. This year the company set both monthly and daily run records – 118 in July and 12 runs on July 2. 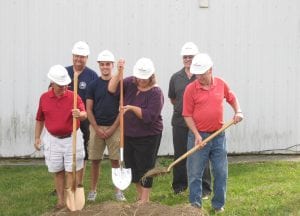