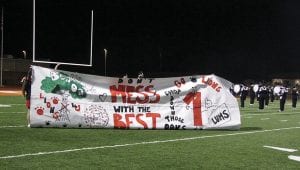 NELSONVILLE – The 10-2 Lions are heading back to Nelsonville Saturday for a Division V regional final.

The No. 6 seed Lions face No. 1 seed and undefeated Lucasville Valley at 7 p.m. in Nelsonville York’s Boston Stadium. Liberty Union defeated No. 3 seed Wheelersburg 24-13 in the first round at Wheelersburg.

The Lions made it 7-3 early in the second quarter with a 29- yard field goal. The Oaks scored again with just 33.7 seconds left in the first half for a 14-3 lead. It took the Lions just four plays and about 20 seconds to score their first touchdown. After missing the PAT, the Oaks held a 14-9 lead at halftime.

The Lions came back again with a 52-yard scoring drive with 10:31 left in the fourth quarter for a touchdown. A two-point conversion attempt failed, leaving Liberty Union with a 22-21 points.

The Lions’ defense stiffened to protect their one-point lead, first blocking a field goal attempt. An Oaks pass on a fourth and ten attempt was intercepted with 3:36 left, but the Lions had to punt it away with 2:57 left.

Justin Barber put it away for the Lions when he intercepted another Oaks fourth and ten pass with just 1:43 left. With Oak Hill out of time-outs, the Lions ran out the clock.

The Lions had to overcome injuries to three key players. Senior defensive tackle and long snapper Luke Hannan left with a knee injury in the third quarter. 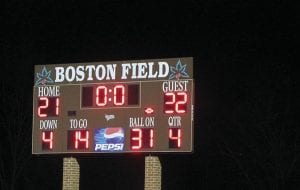 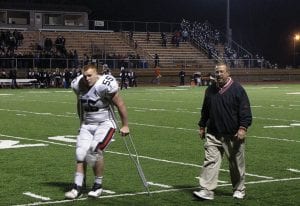