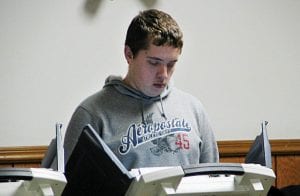 LANCASTER – Liberty Union-Thurston School District voters decided by a 1,501 to 1,206 vote that updating the district’s buildings at 60 percent off made sense.

Voters had one year to approve a 2.8 million bond issue to pay for the balance of the district’s 40 percent share for an expanded and renovated elementary school, a new middle school and a renovated high school. They did it on the first try.

Liberty Union Superintendent Paul Mathews made two phone calls early Wednesday morning. He called the district’s architect’s office at 7:15 a.m. to see if they have started the middle school design. His next call was to the Ohio School Facilities Commission to seek “fast track” status for the two projects. “Hopefully, we can save some money by getting rolling fast,” Mathews explained.

“It bothers me that 1,200 people voted against what we are trying to do,” he said. But Mathews says he understands that times are difficult for some residents. He hopes when the new buildings are dedicated in two years or so that some of the 1,200 “no” voters are impressed with what the district has been able to do.

Mathews expects it will take about a year to design and bid out the new middle school. He doesn’t want to push the design process so fast that staff and community members don’t have an opportunity to be involved. The new school will be built adjacent to the elementary school off South Main Street.

Renovating the high school will be a little trickier, Mathews added. It will take two summers for the work and some work will still have to be done during the school year.

“We really had a hard working group of parents and community members,” he said. “They really helped us at the grass roots. I really appreciate their help.”

In other results Tuesday, Sheriff Dave Phalen easily won a third term besting challenger Darrell Ball by a 13,600 to 4,543 vote. Clerk of Courts Deborah Smalley turned back by a challenge by Dave Hackmann by a 9,237 to 6,521 margin. Both Phalen and Smalley essentially won new terms Tuesday since they won’t have a Democratic opponent in November.

State Senator Steve Austria of Beavercreek is the Republican nominee for the 7th District U.S. House of Representatives. He will face Democrat Sharen Newhardt in November to replace retiring Congressman David Hobson of Springfield.