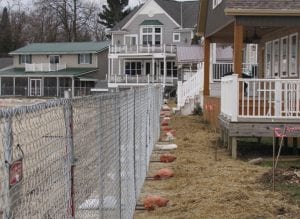 West Bank sidewalk construction has been either stalled or stopped for the last two weeks. Whether that’s the result of the dam-front residents request to stop it, recent inclement weather or the bulky paving machine is unknown. Now that the chain link fence barrier has been placed on the new sidewalk, some residents are questioning why they are prohibited from using the sidewalk should they need to exit their home quickly or need access to the front of their home. Beacon photos by Charles Prince.

We are making the following comments and recommendations relative to the Dam Project at Buckeye Lake for your consideration:

BASIS – The basis of our comments are:

• We are a home owner currently living on the Dam at the corner of Westbank Drive and North Bank.

• We have been involved with Buckeye Lake for over 60 years as a home owner and user of the Lake.

• Our family owns and operates Robbco Marine which provides marine services to over 400 active boaters that utilize Buckeye Lake.

SIDEWALKS – Recent announcements from ODNR indicate their intent to construct a new sidewalk spanning 4 1/2 miles from Liebs Island to North Shore ramp. We think this is a good idea and fully support this initiative as follows:

• SAFETY – by allowing for a sidewalk as planned provides for a much more safer environment for the visiting site seeing, walking, jogging and cycling public. It gives them the choice to walk on the sidewalk or the new cap “Heavy Equipment Surface” or new recreational trail as indicated by ODNR. 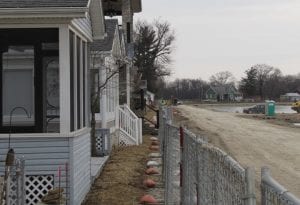 • BOUNDARY – The new sidewalk will provide a delineation of responsibility between the homeowners and the ODNR – which is a reasonable and sensible idea. ODNR and the residents on North Bank should not have to put up with any further encroachments to include past issues with residents planting or placing things on the Dam that are prohibited.

• APPEARANCE – By cleaning up the old sidewalks and installing a new sidewalk cleans up North Bank and will add to the overall appearance of the Dam.

• RESOLVES ISSUES – the new sidewalk removes any lingering encroachment issues with the residents.

• IMPROVES VALUES – The new sidewalk, being new, robust and consistent design, should maintain and improve the values of the homes – which maintains the real estate tax base for the area.

FINISHED DAM SURFACE – We welcome ODNR’s plans to provide for a Multi-Use Trail on the Dam and is another sound initiative by ODNR. We sincerely feel there are few initiatives that will bring more visiting public to Buckeye Lake, more economic value and more enjoyment for all concerned. We recommend the following be considered in the development of the Multi-Use Trail:

• It should be well marked with lanes for East and West traffic.

• Cycling speed limits should be posted to limit speed to under 15 mph.

• Consistent with other Recreational Trails around Ohio, trail heads should be provided to limit unauthorized motor vehicle traffic.

• Trash can receptacles should be provided every 1,000 feet

• Low intensity lighting should be considered.

• Rest stops should be considered with a bench seat – preferably at the turnarounds.

• Protocols should be established to cover such maintenance and use issues as deemed necessary by ODNR.

• offer the visiting public a specific place to fish and enjoy the Lake.

• will offer a perfect attachment point for docks.

• add strength to the new dam.

• will maximize privacy for the North Bank residents by offering a specific place for the visiting public to fish and/or enjoy the lake.

DOCKAGE – The issue of dockage is a much contemplated issue by the residents on the Dam. We do not think that ODNR wants to repeat dealing with problems in the past relative to regulating the installation and use of the docks. Such issues were permitting new docks and regulating the use. We recommend that the following:

• The turnarounds be used for placement of docks

• ODNR should own the docks

• Aluminum floating docks should be installed

• 15 docks might be possible on each turnaround – allowing for a total of 420 boats.

• Each homeowner would be allowed to rent up to 2 docks on a first come -first serve basis. Unrented docks could then be rented to the public.

• Homeowners would be allowed to rent docks for 3 years free in an effort to compensate them for the misery and loss of their docks as a result of the construction project.

FINISHED WALL OF THE NEW DAM – While a steel or PVC finished wall would be nice, rip rap as currently installed will be fine. It does mitigate reflective wave action on the water and does provide a natural setting for wildlife. We do recommend the rip rap be trimmed up for a more uniform look. From the water – the rip rap looks very nice. We also recommend the residual lake matter dug up to install the new dam be removed so as to provide for a clean approach by boats up to the new dam.

In closing, the letter serves as a rebuttal to the recent letter you got from Dave Levacy representing the newly formed Buckeye Lake Region Corporation or “BLRC”. This entity suggests they represents the majority of the views of the residents on the new dam and that they serve as “One Voice” for all constituencies around the Lake” . We can tell you this is simply not the case. The meeting on November 30th referred to by Mr. Levacy apparently was a meeting to marshal support to pressure ODNR to cease and desist the construction of the new sidewalk and a platform to put a petition together. Based on conversations we have with our many customers and residents on North Bank, we maintain the majority of residents on Buckeye Lake and certainly those who do not live on Buckeye Lake but are avid users of the Lake – support the new sidewalk. Additionally and clearly, the majority of everyone we talk with are supporters of the new Multi Use Trail. They both will be a great value added to Buckeye Lake.

As we look out our front window every day, we are very appreciative that ODNR is moving this project along. We look forward to the finished project and hope it gets done in the Fall of 2018 as promised.

Editor’s Note: This letter is published here with the permission of the authors.