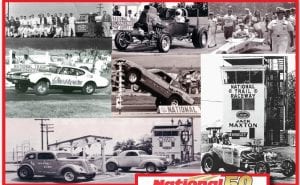 HEBRON– It’s been 50 years since Clark Rader, Sr. and sons Clark Jr. and Ben cut the ribbon on the National Trail Raceway in 1964, creating a legacy of rich racing history in Central Ohio. “This is the 50th anniversary of the raceway,” said Track Manager Michael Fornataro. “We have 100 event days scheduled, everything from the Mopar Nationals to the Ohio High School Cross Country Championships.”

Fornataro said the facility survived the brutal winter and he’s ready for a brand new season of drag racing thunder. “We were very fortunate that the weather did not damage the race surface,” he said. “A couple water pipes broke in the tower but all things considered that was about as good as we could hope for.”

Fornataro is not surprised National Trail Raceway has maintained its popularity for half a century. “As to longevity, I think it is largely because of our diversity of events and low cost entertainment,” he said. “The most expensive spectator ticket is $25, and that’s for a day-long event,” Fornataro added even that ticket has a $5 discount coupon available. “Our location and easy access from I-70 has helped,” he said. “We will be celebrating the 50th at the Buckeye Fuel War event July 18-20, where many figures from drag racing history will be invited, along with a display of historic race cars.” 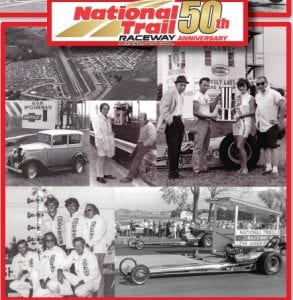 National Trail Raceway was built completely on faith. Clark Rader, Sr., who made his fame through vaudeville acts, and sons broke ground on the facility in the fall of 1963. The 320-acre Hebron raceway was the fifth largest of its kind in the United States at the time. Upon completion of the complex in 1964, the Raders worked to make National Trail Raceway the best racing facility in the Midwest.

In 1972, after using three different tracks in the seven years, National Trail Raceway played host to the NHRA Springnationals for the first time. NHRA Founder and Board Chairman Wally Parks then said, “We had the feeling we were 10 years overdue because of the tremendous fan base that was indicated by NHRA membership and National DRAGSTER circulation numbers from the area.“ Their suspicions proved correct when the race drew more than 40,000 spectators and 600 cars. On both Saturday and Sunday, the gates had to be closed while cars were still sitting on Route 40 waiting to get into the event. The grounds were already full. 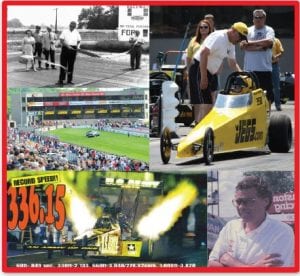 National Trail Raceway was an instant success! Unfortunately, it was one that Clark Rader Sr. was unable to share with his sons as he passed away just months before the event took place. It was heartbreaking to Clark Jr. because his father had worked so hard to bring the event to the facility.

T he Spr i ng nat ionals continued to prosper and grow. National Trail Raceway was the first track at which famed drag racer Shirley Muldowney won a national event in 1976, and the raceway held the first all female professional final round in NHRA history as Muldowney defeated Lucille Lee in 1982.

As time went on, NTR was the site of the emotional win of Frank Hawley at the wheel of Darrel Gwynn’s Top Fuel dragster in their first event after Gwynn’s terrible accident in England during the 1990 season. NTR also hosted the NHRA Sportsman Allstars event on Saturday during the national event. All of the big names in NHRA like Garlits, Beck, Kalitta, Amato, Prudhomme, Bernstein, Beetle, Force, Glidden, Jenkins, Nicholson, Shepherd, and Johnson graced the winner circle under the Rader watch, while surprises like Chip Woodall, Bob Pickett, Richie Zul, and Craig Eppley also won. For the fans of Central Ohio, there was plenty of excitement for everyone.

After such a successful beginning, Clark and Ben built additional stands, more restrooms, and a larger pit area and added more asphalt to the strip. Their crowds had grown from 40,000 in 1972 to over 120,000 in 1995. Through all the years, Clark and Ben worked the track personally and kept it up and running through the 1995 season. In 1996, NHRA purchased the track from the Rader family and started a new era in the track’s history.

With the purchase of NTR by NHRA, the track began to have several improvements including the new VIP and operations tower, a completely repaved track surface, pit improvements and expansion, and other amenities. The Springnationals was renamed t he Pont ia c Excitement Nationals and then the Pontiac Performance Nationals. One of the biggest highlights to come at NTR happened in 2005 when first the national event was changed from mid June to mid May. During that event, Tony Schumacher set the NHRA National Speed record at 336.15 mph. The American Drag Racing League lit up the Central Ohio sky in 2009 with its brand of high horsepower door cars.

Home to many of the greatest touring series in the nation including Northern Class Nationals, Buick Horsepower Nationals, Lucas Oil Drag Racing Series, the Jegs Northern SPORTSnationals, and the Mopar Nationals, National Trail Raceway continues to advance and strive to become the greatest racing facility in the Midwest.

In the early part of 2001, the National Trail Raceway community lost a great patriarch when Clark Rader Jr. passed away. Even though he had sold the track, Clark was still visible at the track during racing events throughout the rest of his life. Though Clark has left us, his and his father’s legacy lives through National Trail Raceway, as always.