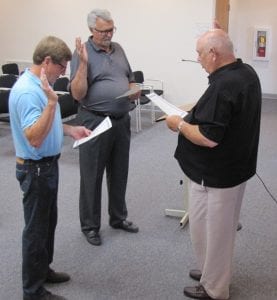 Technically, neither of the new council members are new. Tom Marietta retires to council after a nearly seven month break. He lost a bid last November for a second term. Marietta won a four-year term as a write-in candidate in November 2013. Jim Layton returns after a much longer break. He didn’t seek reelection in November 2001 after he was named general manager of the National Trail Raceway. Layton was appointed to council to fill the vacancy created by John Calhoun’s death. He was elected twice and served nine years, including several years as council president.

“Happy to be here,” Layton commented. “Back in the soup so to say.” Marietta said, “Feels good to be here.”

In other business Wednesday evening, Police Chief Larry Brooks said the department got a good report on an “audit” by the Ohio Guardian on Tuesday. Members are conducting what they call “audits” by videotaping what happens when show up at police departments, jails and prisons, Brooks explained. “They are trying to stir-up trouble,” he added. “I think the goal is to embarrass law enforcement. We were prepared for them to come to see us.” Brooks apologized for not alerting the village administration side of the municipal complex; they showed up there first after videotaping around the outside of the complex.

“They had a pleasant encounter here,” Brooks said. “Office Martin handled it beautifully.”

A 11-minute video of the Hebron ‘audit’ is posted on the group’s YouTube channel. Not all of the group’s ‘audits’ go so well, Brooks added. Some prompted angry confrontations with officers and threats to be arrested or forcibly removed.

With the new appointments to council, McFarland decided to reset council committees for the rest of the year. Committees (first listed member is the chair) are:

McFarland also suggested council members consider turning their monthly combined committees meeting – held on the Monday evening between the two monthly council meetings – into a monthly council work session. The standing council meetings would be disbanded since all members participate equally in the current combined committees meeting anyway. There would be no committee assignments unless a specific need arises, McFarland explained. “It just seems cleaner,” he added.

Earlier, McFarland told council, “It is my understanding that a majority of council supports a fire district.” He then asked for a motion to appoint Fire Chief Clifford Mason the village’s “lead person” on negotiations with Union Township to create a fire district and to negotiate a new services contract with the township until a district is formed. His suggestion was unanimously approved. Mason had chaired the Fire/EMS committee and had me several times with Union Township representative about the contract renewal until he resigned to become fire chief.

During department head reports, Income Tax Administrator Mindy Kester reported that income tax revenue was up $70,000 in June compared to last June. She said receipts in July seem to be holding up as well.

Mason asked council members approval to seek a Bureau of Workers Compensation grant to buy 30 sets of more protective hoods and gloves. He said the Bureau is trying to reduce cancer rates for firefighters by reducing exposure to the products of combustion. The more protective gear would cost about $6,000 but a BWC grant would cut the village’s cost to about $1,000. Council unanimously approved his request.

Council members unanimously accepted the Planning and Zoning Board’s recommendation to reject the only proposal received to review and possibly re-write the village’s zoning resolution and subdivision regulations. The action also authorized seeking proposals for a scaled down version of the original request. This time the project would be an assessment of the current rules along with recommendations for changes and/or updates.

Council members also unanimously ratified the proposed five-year update plan for the Coshocton/ Fairfield/Licking/Perry Solid Waste District. The plan totals 233 pages. Once 60 percent of the district’s population, represented by municipalities and townships, ratify the plan, it is sent to the Ohio EPA for review and approval. Village Administrator Ralph Wise noted that most importantly, the updated plan does not increase district tipping fees at landfills.

In his report, Wise said the water department needs an additional appropriation for capital improvements this year to replace multiple roofs at the water treatment plan. The need to completely replace the roof on the chemical building increased the cost by $63,000, bringing the total to $150,000. “We have the money; we just don’t have the appropriation,” Wise explained. Council members agreed unanimously to ask the solicitor to draft an appropriation amendment ordinance.

Wise also reported that work will begin next week to install lift station monitoring equipment that all nine sewage lift stations. The nearly $33,000 in equipment should monitor in real-time how the village’s sewer collection system is handling flow during a major rain event. That information should allow the village which areas to target first for reducing inflow and infiltration into the sewer system during rain events. “Which one (lift station) gets overwhelmed first,” he explained.

Council continues on its summer schedule next month. The combined committees meeting (open to the public) is set for 6 p.m. on Monday, August 13, in council chambers. Council meets at 6:30 p.m. on Wednesday, August 22.