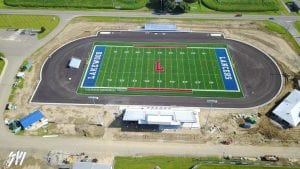 Lakewood’s new football stadium will be dedicated at 6 p.m. on Thursday, August 17. The fall sports teams will also be introduced. Courtesy photo.

Contractors are expected to finish up Friday at the Lakewood Middle School. The new flooring is complete and the new restrooms and painting throughout the building should be done Friday. New furniture will arrive once the construction workers are gone.

The district’s new stadium with synthetic turf will be ready for its dedication at 6 p.m. on Thursday, August 17. The football team has been practicing there since Monday. The new eight lane track has been painted but still needs its lanes to be marked. The pressbox should be complete next week. Landscaping will take a little longer.

The project at the high school to build a security vestibule and a new guidance area was termed “on-going” by Patti Pickering, Director of District Services, in her report at the August 9 board meeting. The area has been cleared and framing the new walls has just begun.

Pickering termed it, “a really, really busy summer.” She said the district’s two new buses will be in service for the first day of school. Bus routes and schedules have been mailed to parents.

She said the district’s on-line registration system went live on July 24. So far 88 new students have used it to enroll and 30 per cent of the district’s parents have updated their forms using the new system.

Pickering said 100 students entering grades K -3 were invited to participate in the district’s first-ever Superhero Training Academy. The hands-on, camp-like program included instruction in reading, writing, math and technology. A total of 43 students participated in the three weeks of half day instruction and fun. Breakfast and lunch were provided.

Administrators will follow the participant’s progress this coming year to see how they do compared to the students invited but who didn’t participate.

District Treasurer Glenna Plaisted reported that a 4.9 mill, five year emergency renewal levy is officially on the Nov. 7 ballot. The levy is currently collected at 4.9 mills and raises $2,353,259 per year. Approval will NOT increase property taxes.

She added that the district’s Finance Task Force that is pre- paring recommendations for the board of education on how to pay for a new elementary school and other upgrades has scheduled two meetings in August. The group will meet at 6 p.m. on Monday, August 14 and again on Monday, August 28, in the high school library. The meetings are open to the public.

Eight new Clevertouch interactive touchscreens have been added to the middle school. Six have been installed in the science labs and two will be on carts so they can be moved around the school. With the addition, every instructional room in the school will have some type of interactive technology.

The board’s next regular meeting is set for 6:30 p.m. on Wednesday, Sept. 13, in the high school library.