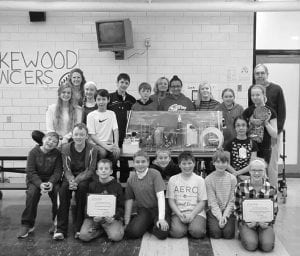 HEBRON – Where in the world is Woo-roo-ma City?

It’s in the hearts and minds of Lakewood Middle School’s Future City team, which won second place statewide for its design during the Future City Competition, last Saturday, at Columbus State.

The Future City Competition is a national, project-based learning experience where students in sixth, seventh, and eighth grade imagine, design, and build cities of the future. Students work as a team with an educator and engineer mentor to plan cities using Sim-City 4 Deluxe software; research and write solutions to an engineering problem; build tabletop scale models with recycled materials; and present their ideas before judges at regional competitions.

The cross-curricular educational program provides students an opportunity to be young engineers and participate in the engineering design process-identify problems, brainstorm ideas, design solutions, test and build, and share their results.

“It’s getting kids excited about things they normally wouldn’t be excited about,” said Holly Graham, a project mentor along with engineering mentor Vern Johnston.

Seventh grader and Future City team member Makenna Riley said she had a chance to travel to Australia as part of an ambassador program, and learned “Woo-rooma” is aboriginal for “Westerly Wind.” Her team agreed it was a perfect name for their imaginary city, which actually contains no roads – all vehicles pilot themselves automatically.