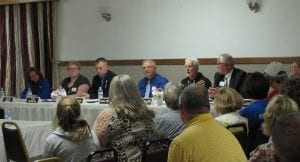 HEBRON – What a difference a week makes!

Just one week after a standing room only, raucous school board meeting, more than 100 district residents, parents, teachers and staff members jammed Hebron’s American Legion hall for a nearly two-hour candidates’ night. The audience was attentive and quiet. The seven candidates, including incumbents Judy White and Tim Phillips, seeking three positions on the board were well prepared and respectful.

There were no outbursts, positive or negative, from the audience. It certainly helped that no one was censured to open the meeting as President Judy White asked board members last week to censure board member Steve Thorp. Then board member Bill Gulick then asked the teachers’ union leaders to resign for conducting a vote of confidence concerning Superintendent Mary Kay Andrew, eventually asking them to resign as teachers as well. Those two opening statements set a very negative tone for the nearly three-hour board meeting that included two executive or closed sessions.

An early question was how would candidates use feedback. Answers are excerpted.

Tara Houdeshell: “Feedback would be greatly valued…We should do a little more listening.”

Jon Lynch: “I’m a fan of listening. It all starts with listening.”

Doyle Pertuset: “We should listen and respond.”

Tim Phillips: “We need to listen to everybody…We need to engage people.”

Bill Pollard; You have to collaborate. “If you listen, there will be commonalties.”

Judy White: “We work well when we collaborate.”

Chelsea Francis: “Use data and feedback to formulate policy.” The board needs to engage with the community.

How would you select or evaluate the superintendent?

Jon Lynch: Consider what they inherited and then how well they met the objectives set for them. He added that any decision on Andrews’ contract should be delayed until after the board is organized next year.

Doyle Pertuset: How well does the superintendent react with the community?

Tim Phillips: The board does twice a year evaluations based on state standards.

Judy White: It’s “not uncommon” to offer an early contract. “Nothing new.” After reeling off some highlights from Andrews’ district update presented at the board meeting, she said, “We’re hitting all the marks educationally. I support Mary Kay.”

Chelsea Francis: The superintendent’s contract shouldn’t be treated differently than the contracts for other staff.

Tara Houdeshell; Evaluation should look at the objectives. Agreed that the decision should be delayed until January.

If you could undo one decision made by the board in the last four years what would it be?

Tim Phillips: I disagree with the timing. The cost went from $1.75 million to $2.7 million. “We went a bit overboard on the design.”

Bill Pollard; I would have built the stadium in stages. I would not have proceeded with one bid.

Judy White: “I support the stadium. We collaborated with the athletic boosters. Why do something part way?” We completed the solar project. “I make no apologies for it.”

Chelsea Francis: “I would undo the stadium…The elementary should have come first.”

Jon Lynch: The stadium project has tied up $280,000 a year for the next 10 years. “Academics must come first.” He noted that while students only spend three years in the 104-year old elementary school, teachers spend decades, sometimes their whole career there.

How should contracts for the new elementary school be awarded and how should cost overruns be controlled?

Tim Phillips: We need at least three bids. Some firms should be thrown off the bid list. We’ve got to limit cost overruns.

Bill Pollard: We need to receive enough bids and provide enough time to get the job done. He said the construction time line for the stadium was too tight.

Judy White: She relies on the district treasurer to make contract decisions. Cost overruns were only 10 percent.

Tara Houdeshell: Would work hard to learn to make sure we’re doing it right.

Jon Lynch: There were contingencies on every aspect of the project. Need to have clear expectations and goals. “We’ve got to get it right.”

Drug possession, use and distribution is a known problem at Lakewood. Why was a student athlete who was arrested for drug and paraphernalia possession allowed to continue to participate?

Bill Pollard: It is in every school. I am in favor of drug testing; you will be drug tested at your employment.

Judy White: She is sure the issue of the athlete was handled legally. “There is nothing wrong with drug testing.”

Tara Houdeshell: Athletes shouldn’t be treated differently. No exceptions made for any student.

Jon Lynch: Rules should apply to everyone.

Doyle Pertuset: We need to get students ready for the workforce. We should randomly test for drugs.

Tim Phillip: “There has to be consequences. Every student should have a consequence.”

Candidates were asked if they were self-funded or accepted donations. If they accept donations how would they maintain their objectivity?

Judy White: “I”m not spending a dollar on my campaign…I’ve never put up a sign.”

Chelsea Francis: I have accepted donations from friends and family. As to objectivity, “they are the people I lean on.”

Tara Houdeshell: I have accepted donations also from family and friends. They aren’t special interests.

Tim Phillips: “I’m no funded; my wife won’t give me any money.”

Bill Pollard: Self-funded. “My goal is to help stretch your tax dollars.”

How can the board regain the trust of the taxpayers?

Chelsea Francis: “Transparency!” Board meetings at 7:30 a.m. “need to be a thing of the past.”

Tara Houdeshell: We need to learn how to listen. We need to find common ground. Transparency. Need to provide meaningful engagement with the community.

Jon Lynch: “We need to welcome the community back to board meetings.”

Doyle Pertuset: We need to respond to questions. We need to work with people.

Bill Pollard: We need transparency. We need to solicit feedback from everyone and do it regularly.

How do you view open enrollment at Lakewood?

Tara Houdeshell: I think it provides an important choice for families. “In general, I’m in favor of open enrollment.”

Jon Lynch: Families should have the ability to do what they believe is best for their children. The district should conduct exit interviews when students leave the district to see why they are leaving.

Tim Phillips: Used to have more leaving the district; now we are about even. We need to offer things to attract other students here because it is good for our students.

Bill Pollard: We have to get where more students want to come here.

Judy White: More coming in than going out.

Chelsea Francis: It is a compliment if we have more students coming in than going out.

Is it OK for the superintendent and administrators to consort with, vacation and hangout with subordinates?

Tim Phillips: “No problems with it at all.”

Bill Pollard: I don’t think it is an issue. Interacting outside of work should be encouraged.

Chelsea Francis: “I don’t think there is a blanket response.”

Tara Houdeshell: I support it but there is a fine line. Those at the top need to have parameters.

Jon Lynch: I think it comes down to perception. He is concerned if the subordinates are the ones giving feedback on evaluations.

How do you value teachers and rank their feedback?

Tim Phillips: Teachers are the most valued in the district.

Bill Pollard: Teachers are critical. I want to know what they think. “Very, very important!” You have to listen to everyone.

Judy White: We need to support our teachers.

Chelsea Francis: Teachers are obviously the backbone of our district. Wonders why only 19 percent have confidence in the superintendent. We need to know why and start fixing the issues.

Tara Houdeshell: They have to be valued, heard and answered. Ranking isn’t possible. We have to listen to everyone.

Jon Lynch: I support our teachers. They do the heavy lifting.

Doyle Pertuset: I highly value teachers. Wants to know why so few have confidence in the superintendent.

Lakewood is one of the few districts without a multi-disability program for learning disabled students.

Pollard: They need extra attention and resources. Will help stretch our dollars so we have more of these resources.

Judy White: “Special ed needs are met in the district.” We can always do more.

Chelsea Francis: “We need more services for kids with special needs. We need to catch-up. We need to start earlier.”

Tara Houdeshell: We need to investigate the problem.

Jon Lynch: You have to make sure teachers have the resources they need.

Doyle Pertuset: We should learn from other districts.

The final question was what makes you most proud to be a Lancer?

Doyle Pertuset: The support of the community amazes me.

Tim Phillips: The pride in his children and grandchildren at Lakewood.

Bill Pollard: Following the success of his two graduates and their friends. We’re getting ready to spend $42 million and we need to get it right.

For issues of length, we skipped answers about Common Core which were generally negative from all candidates and a question of how you would respond to a comment that Lakewood graduates are the best ditch diggers around.