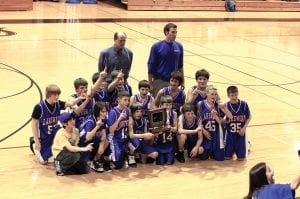 Lakewood was down three points in the nailbiter with 53 seconds left. Friday, when Reese Dupler’s basket cut the deficit to one. Cory Thomson put the Lancers ahead after he was fouled and made both shots. Then with three seconds left in the game, Newark shot and missed. Jarred Chorpening got the rebound after Daylan Loomis boxed out the Newark players. Chorpening passed the ball to Reese who passed to Chris Briggs. Briggs made a nice shot that didn’t go in and Major Henry rebounded and sunk it to seal up the championship for the Lancers.

This team started as a YMCA team for the 2007-2008 season with coaches Rodger Dupler and Gary Thomson. They did well and learned a lot. In the 2008- 2009 season, the team moved to a traveling league where they again did well. School league play starts in the seventh grade.

This year head coach Jarred Mayberry and now assistant Rodger Dupler had the team working hard. The Lancers finished the regular season 12- 2 with both losses coming to Newark Catholic. Lakewood was seeded second in the conference tornament, behind Newark Catholic. In their first tournament game, the young Lancers defeated Bexley 48-25, then defeated Whitehall 38-26 in the semi-final.