Levy request to return in November 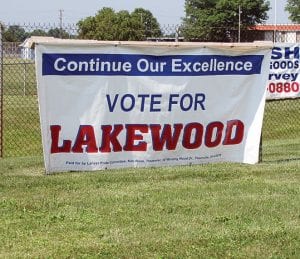 HEBRON – The only thing Arnie Ettenhofer, Lakewood School District’s director of pupil services, is certain about the district’s failed levy is that it will appear again on the November ballot.

“We don’t have a choice; we still need that $4 million,” he said. Tuesday, Lakewood School District voters defeated the additional 9.9 mill levy in a special election 1,672 votes in favor to 1,754 against the levy according to unofficial results – a difference of 82 votes. Voters also rejected the same levy last May by a 2,380 to 2,170 vote. Tuesday’s loss is the third in a row as the district seeks to replace revenue lost after the state phased out the personal property tax assessed primarily on businesses. The first attempt was for an additional 8.9 mill levy that voters trounced in November 2009 by a 2,971 to 1,798 tally.

Lakewood voters will see the same 9.9 mill levy on the November ballot. Wednesday, August 4 was the deadline to submit issues to the board of elections for the November ballot, giving district officials no time to make any adjustments after Tuesday’s special election. If it is rejected again in November, the district will have to cut $4.4 million from its budget for the 2011- 12 school year. That will be in addition to the $1 million per year already cut after the 8.9 mill levy proposal was defeated. 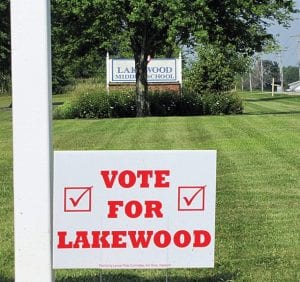 Ettenhofer said he’s not sure what the school board will do at this point, other than trying again in November. He expects the board will discuss the defeat and strategies for November in depth during its Aug. 11 meeting. Ettenhofer guessed that low voter turnout – only 34.7 percent of registered voters visited the polls – might have contributed to the levy’s defeat.

“Nothing’s sacred,” said Superintendent Jay Gault, referring to what will be cut from the district to total $4.4 million, should the levy be defeated again in November. “That’s the last chance,” he said. “I think there’s a multitude of reasons why it failed.” Gault believes the current struggling economy had a lot to do with it.

He said the board would need to begin exploring where to make cuts if the November attempt fails, but he’s not sure of anything specific yet.

Lakewood School Board President Joe Bowman, Jr. isn’t sure yet about specific cuts, either. “We’ll continue to work on that,” he said.

Bowman has some theories on why the levy failed. “If you look at our history, we’ve only passed five levies since 1978,” he said, and those only passed after many attempts. “This certainly isn’t the best (economic) environment to pass a levy,” said Bowman. He said between now and November the board would work to clear up any misconceptions about the levy and the district that may be floating about the community. He said he knows people are concerned about paying more taxes, but Bowman said Lakewood residents pay the least school tax of any Licking County district. In addition, he said Lakewood only receives $4.6 million from the state, the lowest amount of state funding of any Licking County district. “Obviously, we’re not a wealthy school district,” he said.

Bowman said previously that if the August attempt fails, it’ll be “business as usual” until Jan. 1, 2011, but then the district will be forced to begin considering cuts. However, the district will begin exploring options of where to make cuts immediately, because the levy failed. Bowman promised that process would have plenty of public input, similar to the process where $1 million was cut from budget. “We’ll never pull the trigger without the buyin from (the community),” he said.

“We will keep moving forward,” said Bowman Wednesday. He said the district still has great students, staff, parents, and community members. “There are still some good things going on in the district,” said Bowman. “We’re just in a financial pinch.”