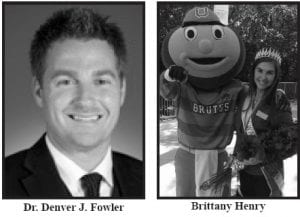 Dr. Denver J. Fowler, a 1997 Lakewood graduate, was recently named the 2015 State Assistant Principal of the Year in the State of Ohio. Fowler is the assistant principal at Gahanna Middle School South.

“I am truly honored to receive this award. However, I credit the students, staff, parents, and community members that I have the opportunity to work with on a daily basis,” Fowler said.

The award recognizes outstanding middle level and high school assistant principals who have demonstrated success in leadership, curriculum and personalization. Fowler will represent his school district at the Ohio Association of Secondary School Administrators (OASSA) State of Ohio Assistant Principals Conference in March, where he will be recognized by his peers and receive a plaque from OASSA.

Lakewood graduate Brittany Henry was recently crowned as the 2014-15 Homecoming Queen at The Ohio State University – Newark Regional Campus. Henry is a sophomore Business major and a 2013 Lakewood graduate.

Henry was selected during the Homecoming festivities at The Ohio State University Columbus Campus, where she participated in the Selection Luncheon, the Columbus Campus Homecoming Parade, the OSU Football Pep Rally, and was presented on Saturday morning at The OSU Marching Band’s pre-game “Skull Session” in St. John Arena. Henry had VIP seating for the OSU-Rutgers football game. She is the daughter of Scott and Michele Henry of Glenford.