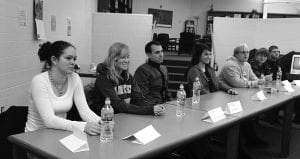 “I wished I would’ve looked into other areas (of study),” said Lakewood grad Brittany Lang, who is an electrical engineering major at Ohio Northern University. She’s finding that electrical engineering may not be for her, but she said college students shouldn’t fear changing majors if that’s what they want to do. College counselors are supportive and helpful in these decisions.

“You have to have good time management skills or you won’t get anything accomplished,” Lang told the high schoolers. She said her typical day begins about 6:45 a.m. with classes that last until 1 or 3 p.m. Lang attends track practice for a few hours before studying in the evening.

“Don’t sell yourself short,” said Lakewood grad Brian Wright, an IT major at West Point. “Apply for the school of your choice and go for it.” Wright, attending a military academy, has an atypical college experience. His day starts at 5:30 a.m. and, unlike most college students, his living quarters is required to be spotless at all times. “My room has to be perfect,” he said. Wright has classes until noon or 3 p.m., then intramural sports, dinner, and study until bedtime. He said West Point professors each assign two hours of homework per class per day. “I have about five classes,” said Wright. It’s very difficult to keep up with the workload and he averages roughly five hours of sleep per night.

Lakewood grad Hannah Dixon, a track and field athlete at Otterbein College, advised high school students to enroll in college even if they haven’t decided on a major. She’s taking secondary education and biology, but leaving her options open. Her typical day begins later than Wright’s, with classes beginning at 9:30 a.m. and generally lasting until 2 p.m., followed by track practice. “I never studied in high school, ever,” Dixon admitted. As a result she said she had to learn strong study skills very quickly. It took some work, said Dixon, but she’s adjusting. Another adjustment was accepting she could leave class when the professor said it’s over, unlike high school classes where everyone is required to remain until a certain time each day.

Dixon suggests joining as many organized campus groups as possible to meet new friends. “Then you’re not stuck hanging out with your roommate,” she said.

“I’m learning strategies of learning,” said Lakewood grad Josiah Olsen, a math and economics major at Kenyon College. He told the high school students he wished he spent a little less time “playing chess and wasting time” while he was a high school student but, then again, a liberal arts college like Kenyon provides four more years for a student to learn about him or her self.

Most days Olsen wakes up around 8 a.m., but can schedule afternoon classes if he likes. He can expect about four or five hours of homework per night-far more than he experienced in high school.

“The harder you work in high school the better,” said Lakewood grad Andrew McKnight, who’s taking aerospace engineering at The Ohio State University. Form his observations of college classmates so far, he’s concluded, “Don’t be a pothead; you’ll fail.” He regrets scheduling chemistry labs in the evening, because they continue late into night, then he has to wake up early the next day. McKnight definitely works harder in college than he did in high school. “Procrastination is a big no-no,” he said. If a college student can be organized about class work, he or she can have plenty of free time, McKnight observes. “Take the hardest courses you can (in high school),” he said. “Push yourself.”

“Don’t be late to class,” said Lakewood grad Miranda Gloyd, a nursing major at the Ohio State Newark campus. “You get points for going to class.” The number of classmates who skip classes surprises her. They’re not doing themselves any favors, said Gloyd. Time management is critical to her because she’s working her way though school with a mall job. “I’ve pulled a couple of all nighters,” said Gloyd. She advised the high schoolers not to worry about a job interfering with schoolwork. Most businesses that employ college students, she said, offer flexible scheduling.

Lakewood grad Kyle Weekly, a fire fighter and EMT, arrived later in the forum, but advised the high school students not to “take a break” their senior high school year, but rather to study hard and prepare for college’s challenges.