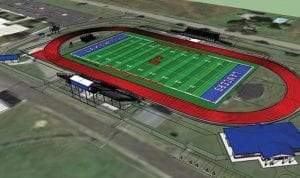 That’s a $500,000 or 25 percent increase above the $2 million estimate when board members narrowly approved the lease-purchase financing plan on October 12, 2016. The lease-purchase financing allows the district to borrow money without seeking voter approval. Board President Judy White and members Trisha Good and Bill Gulick supported the plan; members Tim Phillips and Steve Thorp opposed it.

Plaisted said three lender proposals were received in early January. Capital One Public Financing was selected at a rate of 2.87 percent with a 10 year term. The balance can be paid off without penalty after four years if funds are available.

The project is a joint effort between the school district and the Lakewood Athletic Boosters. The boosters will be paying for the artificial turf field, the engraved bricks on the donor wall, a walk-in cooler for their concession stand, donor recognition signage and the privacy screen on the fence below the home stands. 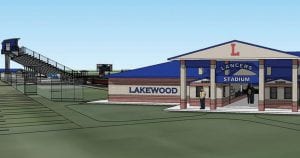 The boosters have a $458,000 contract with The Motz Group for the purchase and installation of the turf field. The organization obtained a loan to cover their commitment and will repay the loan with future donations. That loan does not include any liens on district property or any guarantee of repayment by the district.

The school district is paying for the new – up from six to eight lanes – track, bleachers, concession stand, new and upgraded restrooms, ticket booths and site preparation including drainage under the new turf field. Two of the three contracts for the district’s share of the project have been issued.

The Motz Group has a $677,150 contract for the site preparation work including curbing, drainage under the turf field and the new eight-lane track. The cost to add the two additional lanes was approximately $75,000.

A second contract for $692,122 was awarded to Dant Clayton for new bleachers which includes the home and visitors’ stands and the band stands. The new bleachers will be ADA compliant. Seating capacity will increase from 1,100 to 1,300.

Board members have set a special meeting for 5 p.m. on Thursday, February 23, at the Lakewood administrative office, to award the board’s third and final contract for the stadium project. The agenda lists a resolution “ waiving further competitive bidding for the Lancer Stadium work and award contract to Charter Hill Construction.” The contract amount was not listed on the agenda.

If it exceeds $1 million, the district will likely have to allocate more than $2.5 million to the project. The first two contracts total $1,369,272 plus the district has spent tens of thousands for architectural and design services, a general contractor, financial consulting and their special legal counsel. Charter Hill will be building the new stadium entrance complex which includes the concession stand, new rest rooms and ticket booths.

In other business February 8, board members learned that Governor John Kasich’s proposed biennial budget will cut state funds to Lakewood by $254,000 next year and possibly an additional $600,000, according to Plaisted. The potential $ 600,000 loss depends on whether the new biennial budget beginning July 1, 2017, maintains the hold harmless supplement at current levels. The supplement helps school districts offset some of their loss from the phase out of the tangible personal property tax.

Plaisted said the proposed budget retains the cur rent ‘foundation’ funding at $6,000 per student. “We don’t get the full $6,000,” she explained. “We get 28.49 percent ($1,709 per student). The state uses a very complex and complicated formula to set each district’s foundation that is based on the value of the district’s property and its ability to assess property taxes.

Right now, Lakewood would get some transitional aid from the state to make sure the district doesn’t lose more than 5 percent of its state aid due to declining enrollment, Plaisted said. Lakewood’s enrollment dropped 10.1 percent over the FY 2011 to FY 2015 period.

District technology director Justin Post demonstrated a possible replacement for the district’s aging Smartboards. Clevertouch Plus is an interactive TV with a useful life of 50,000 hours. They can be controlled by a computer, smart phone or tablet. The 55-inch screen is “spectacular” in the classroom.

Post said the lack of calibration problems is a key advantage over Smartboards. The high school currently has just two Clevertouches but one will be mounted on a cart to allow it to be moved between schools. Smartboards typically require permanent installations in class rooms. A Clevertouch Plus costs about $2000.

Two Life Skills students explained some of the skills they have learned in the program. Students learn how to make change, measure, make a budget, learn their telephone number and address, how to write a letter, how to do laundry and other every day living tasks.

Three seniors in AP Government recounted their trip to Washington, DC for the inauguration. It was quite an effort to find tickets, eventually getting some from an Arizona congressman. The three students – Travis Brailey, Dawson Mechum and Cade Plotts – also learned that making on-line hotel reservations doesn’t guaranteed that you have a room. Their hotel wouldn’t register them because they aren’t 21 or older. It looked like they were going to spend the night on the street until they found an Ohio acquaintance who registered for them.

The three got a photo op with Kasich and spoke with Ohio Attorney General Mike DeWine and Lt. Governor Mary Taylor. They thanked their AP Government teacher Kevin Miller and high school principal Stacy Stein for giving them the time off to make the trip and helping plan it.

In her report, Superintendent Mary Kay Andrews said junior clarinetist Michael Blaha was one of just 95 students in the state chosen for the All State Band. Junior Mia Fooce in CTEC’s Fire and Emergency Management program was named junior citizen of the month at CTEC. Senior and student representative on the board of education John Hoffman took first place in the 50 meter freestyle in the Licking County meet and was named first team all Licking County League. Stephen Butsko had the third highest bowling average in the county.

Board members also approved the May 9-12 trip to Washington, DC, for middle school 8th graders.

The board’s next regular meeting is set for 6:30 p.m. on Wednesday, March 8, in the high school library.