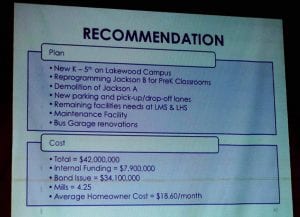 HEBRON – Nearly 100 residents, parents, teachers and staff members showed up Wednesday evening for the Lakewood Board of Education’s regular meeting.

The attraction was to hear the recommendations to the board from the Elementary Planning Team and Finance Taskforce. Superintendent Mary Kay Andrews said the recommendations were the result of “several years of work” beginning with the Facilities Assessment that began in January 2015. “It’s been the driver,” she said.

The Planning Team made a convincing case that Hebron Elementary needs to be replaced, citing:

• Safety concerns since the office is too far away to monitor the entrance effectively;

• Classrooms are small and congested and some don’t have natural lighting;

• A small and cramped cafeteria in the basement; and

The Team also evaluated Jackson Intermediate school which consists of three separate buildings. The roofs are flat and there are no security vestibules to monitor who is coming into the buildings.

• Classrooms & technology that support all types of learning;

• Flexible spaces that grow with us.

Martindale also said transitions are difficult for many students, noting now there are separate buildings for K-2, 3, 4 -5, middle school and high school.

• Separation of bus and car traffic

In addition, Jackson B – the one on the hill – would be repurposed for the district’s pre-school program. Earlier, there had been some discussion about moving the district’s administrative offices in Hebron to Jackson B as well. “That’s not a decision,” Andrews said.

Jackson A would be demolished and replaced with a new parking lot, primarily for athletic events.