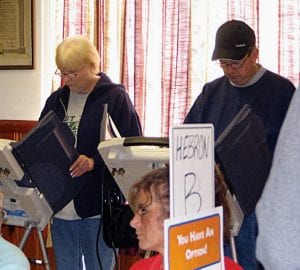 In Licking Township, voters narrowly rejected an additional three mill levy for fire/EMS services. Unofficially, the levy lost by 58 votes. The additional revenue would have allowed the Licking Township Fire Company to provide 24/7 on-station coverage at its Jacksontown fire station. That station is currently staffed from 8 a.m. to 4 p.m. on weekdays with additional paid staff on station some nights from 10 p.m. to 6 a.m. The new levy would have supplemented two existing one-mill levies. Calls for service have dramatically increased from 685 in 2002, when part-time paid staff was added, to a projected 1,100 runs this year.

Hebron voters again rejected a half percent increase in the village income tax by a 520-402 vote. Hebron Village Council originally approved a one percent income tax in 1998, but any increases above that level must be approved by voters. Hebron residents receive a 100 percent credit for any municipal taxes paid. Thanks to that credit, village officials estimate that only five percent of Hebron residents actually pay the tax. Most of the revenue comes from non-residents who work at businesses in the industrial park. In three published reports to residents, village officials explained the reasons behind the request and said a limited budget combined with increasing costs will ultimately require a reduction in the number of services offered and their frequencies.

Buckeye Lake Village voters trounced the fourth attempt for an additional police levy. The vote for the new 2.5 mill levy was 601 “no” to 353 “yes.” More voters favored renewing a .8 mill levy for current operations, but not enough to get it extended for five years. The unofficial totals were 509 to 439. Village officials waited until the last opportunity to put it on the ballot as an existing tax. With its rejection, the small levy, primarily used to pay for street lights, will not be collected next year.

Ki rker svi l le voter s rejected a contract for limited water service with the Southwest Licking Community Water & Sewer District. Some residents successfully submitted a petition for a referendum and voters rejected the village council approved contract by a 179 to 90 vote.

Union Township’s 1.5 mill replacement fire/EMS services levy was the only exception to Tuesday’s antitax mood. It was approved by a nearly 2:1 margin.

Nearly three fourths (72.2) of the county’s registered voters turned out for the historic presidential vote. County Commissioner Mark Van Buren was the only incumbent rejected. Van Buren was appointed to the post earlier this year when Marcia Phelps resigned after she was elected municipal court clerk. Brad Feightner, who Phelps defeated last November for the clerk’s post, bested Van Buren by an unofficial 38,660 to 34,908 tally. This was Van Buren’s third attempt for the post.

Incumbent Bryan A. Long was reelected County Recorder over Hebron resident Dale Burns by a 43,881 to 26,620 vote. Gary R. Walters retained his post as Clerk of Common Pleas by a 45,256 to 26,455 margin over Gerald A. McLaughlin.

In the only county-wide issue, voters rejected an additional one mill operating levy for C-TEC by a 41,988 to 28,937 vote.

Granville resident Bill Hayes bested Hebron resident Dan Dodd in Licking County in the race for 91st District State Representative. But Dodd overwhelmed Hayes in the rest of the district to win a second term by a 31,664 to 24,103 tally. It was a rematch of the race two years ago.

Congressman Zack Space bested Fred Dailey in Licking County, en route to a 147,506 to 102,059 victory for his second term.