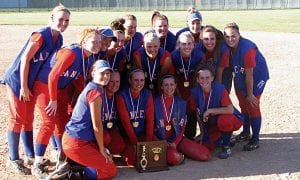 PICKERINGTON – Lakewood’s Lady Lancers are just two victories away from returning to the Division III state softball tournament in Akron.

The defending Division III state champions drew a bye as the #1 seed in the district tournament. The Lady Lancers defeated East Knox 4-0 at home on May 14.

In the district semi-final May 19 at Pickerington, the Lancers turned back Amanda-Clearcreek 2-0. The anticipated district final matchup with #2 seed Liberty Union didn’t materialize. The Lady Lions fell 3-0 to #8 seed Johnstown-Monroe.

The Lancers gave up their first run in the tournament in the second inning after the Johnnies’ Lauren Elkins singled and eventually made it to third on two wild pitches. She then scored on a throwing error to third base for a 1-0 lead. The Johnnies held that narrow lead until the bottom of the sixth inning.

Jessica Lewis lead off for the Lancers with a single on the right field foul line. Meagan Kelley ran for her. Emily Voehringer followed with a single up the middle. Brayan Gault bunted for a single and Kelley scored when the ball was bobbled at first base.

After an out, Caitlin Houk hit a sacrifice fly that scored Voehringer from third base for a 2-1 lead.

That was enough for Lancer ace Alissa Birkhimer. The senior struck out the side in the top of the seventh for the district final win. Birkhimer finished with 11 strikeouts and allowed just two hits.

The Lady Lancers meet Piketon at 5 p.m. Thursday in Lancaster in the regional semi-final. The regional final is at noon on Saturday.