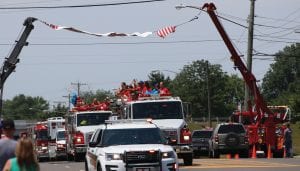 In the last three seasons, the Lady Lancers have won two state championships and lost the third by one point in the state final. They have amassed a 93-3 record in those three years.

In Friday afternoon’s state semi-final, the # 1 ranked Lancers took on # 9 ranked and 22-4 Plain City Jonathan Alder. It was the Pioneers’ second trip to the state semifinals.

Alder scored first, taking a 1-0 lead in the first inning. Lakewood exploded in the third inning with 12 batters, scoring 7 runs for a 7-1 lead. Alder added two runs in their half of the third inning.

In the fourth inning, a spectacular over the fence catch robbed Brenna Brownfield of a home run, but a bases-loaded double by Tigan Braskie added three more runs for a 10-3 lead. Brayanna Wilson followed with another double making 11-3. Megan Hitchcock’s RBI-single made it 12-3.

Alder scored twice in the bottom of the fourth, getting below the mercy margin at 12-5. Doubles by Brownfield and Courney Knepper increased Lakewood’s lead to 13-5. A walk, ground ball sacrifice and a passed ball in the sixth made it a 14-5 game. Alder made it 14-6 in the bottom of the sixth.

Lancer ace Courtney Vierstra struck out two and got the Alder’s last batter to ground out for a 14-6 victory.

It was scoreless until the third inning when Alexa Perry tripled to lead off the inning. After Megan Davis lined out to short, Brownfield hit a no-doubt homer to left field for a 2-0 lead.

Hoban turned it into a nailbiter in the fourth, scoring an unearned run with just one out to make it 2-1. Vierstra left two on base, getting the final two outs on a strikeout and batter’s interference. 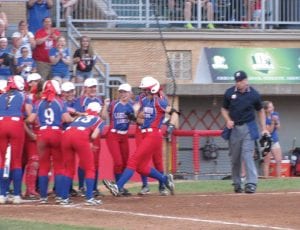 Top, Brenna Brownfield scores the winning run with her two-run home run in the third inning. Bottom, the final scoreboard tally in the Division II stat

Lakewood threatened in the fifth, with two outs and with Megan Davis on second after she singled and moved to second on a sacrifice. Vierstra hit a hard ground ball down the third base line that looked fair to Lakewood but was ruled foul. She was later called out on strikes.

Hoban lead off the sixth with a single. Three straight fielders’ choices left a runner on base. Lakewood went three up, three down in the bottom of sixth.

Lakewood held on to their 2-1 lead getting two ground outs and a strike out. in the top of the seventh.

Lakewood’s traditional “Greatest Ride in America” through Hebron on fire engines was delayed until 1 p.m. Sunday rather than waking up the village with sirens and flashing lights early Sunday morning. 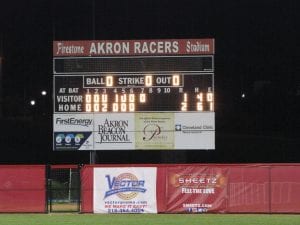