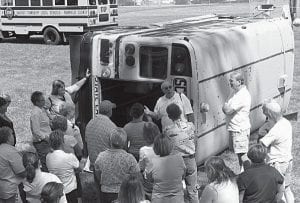 Above, Millersport Fire Chief Bill Yates explains how to handle a school bus accident to drivers from Hamilton Township, Liberty Union-Thurston and Walnut Township school districts last week. Walnut Township Schools donated a worn out handicap bus for the training session. The Millersport Fire Department will use the old bus for additional training before it is sold for scrap. Yates explained how to get out children out of the bus and an Explorer member of the fire department demonstrated how easy it to kick out the windshield, creating an escape route for students and the driver. Below, Yates used a smoke generator to prepare drivers for conditions during an accident or fire. Courtesy photo.

She will be paid $12.75 per hour for up to 24 hours per week. She is expected to assume her new post next month. She will replace Johnny Adkins.

In other Kirkersville news:

• And the real name of “South Alley” is…(a drum roll, please)… Alley Street. During the Aug. 6 council meeting, former council member Carolyn Woods wondered if the street has a real name. Most people know it as South Alley but mail and packages have been adorned with several street names, that is, if the delivery people can find the street in the first place. “We even get (deliveries) as Sally Street,” she said.

Ashcraft said Tuesday he checked with the fire department and is certain the road is called Alley Street. He added the village is working to gain Issue 1 federal grant money to pave many village streets, including Alley Street. 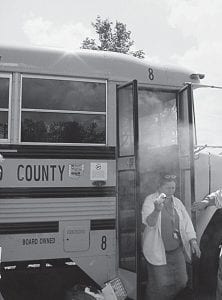 • Ashcraft said a three-mills operating levy will appear on the November ballot. This will be the fourth time the levy will be voted upon and Ashcraft hopes the fourth time will be a charm. There’s no increase in millage over the current levy, which expires this year, he said. If the levy fails a fourth time, the mayor said the village would be forced to make cuts. He wasn’t specific.

• Ashcraft said the police department’s evidence room is being organized; the evidence room has also served as a general storage room for some time. “It’s something I inherited,” he said. Now the clerk of court is the only person with a key and the room will be for police evidence only, said the mayor.

• The mosquito spraying truck won’t blow through the village, said Ashcraft. During the Aug. 6 council meeting, residents said they believe the truck that fogs for mosquitoes travels too quickly, reducing the effectiveness of the mosquito spray. Ashcraft said that the “matter was taken care of,” and didn’t elaborate further.