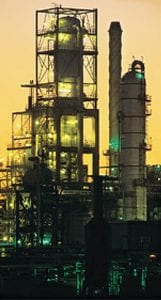 Vanashree’s distillation column, similar to the lighted column above left, would extend some 100 feet high. The enclosed carbon dioxide stripper unit on the right would be about 80 feet high. Switchgrass, in the photo to the right, grows up to 10 feet high. Courtesy photos. ethanol. Even marginal farm year.”

COLUMBUS – The Buckeye Lake area will soon be ground zero for America’s push for energy independence and renewable energy, bringing hundreds of jobs.

The Beacon learned this week that the Ohio Department of Development plans to announce within days a joint venture with Vanashree Agrotech of Pune, Maharashtra in India. The company is a leader in the conversion of biomass into fuels.

The announcement could be made by Ohio Governor Ted Strickland as early as next week. The development of alternative energy production in Ohio was a key part of his Turn Around Ohio initiative during last year’s campaign. A Strickland spokesperson declined to comment. “Let’s wait for the formal announcement,” she said.

Vanashree Agrotech plans to build a 100,000 gallon per day ethanol distillery in Fairfield County, just west of Buckeye Lake. Sites are being evaluated in both Walnut and Liberty townships.

Ethanol plants aren’t new to the U. S. or Ohio. Currently, they convert corn to ethanol. The increasing use of corn for ethanol production is responsible for record high corn prices, prompting fears about the cost impact on meat production and food prices in general. A conventional corn-based plant is planned for Thornwood Drive in Newark. 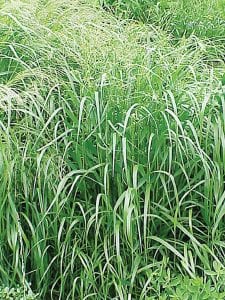 Vanashree plans to turn the promise of switchgrass into reality. President George W. Bush touted the possibilities for switchgrass, Panicum virgatum, in his State of Union Address in January. Hundreds of years ago, much of Ohio, particularly the prairies west of Columbus, was covered with switchgrass. The tall native grass, up to 10 feet high by the end of the growing season, has stems as thick and strong as pencils. It can be cut and baled with conventional farming equipment.

Vanashree expects to operate 300 days per year, according H. R. Jayna, engineering supervisor. That means area farmers would need to commit up to 150,000 acres for switchgrass production. “That’s a lot of acreage,” OSU Extension’s Bill Maize agrees. “However, I’m confidentwe can get yields above 3,000 gallons per acre with prime farmland. We might also be able to get two crops a year.”

While Vanashree’s plant might look like a refinery, it’s actually a distillery that first converts the cellulosic cell walls of the grass into sugars that are then fermented to produce the alcohol fuel. It’s distillation column will extend some 100 feet into the air, but that’s not much more than a typical farm silo, Jayna said. This will be a scale-up of the company’s 1,000 gallon per day distillery in Pune, he explained.

Most of the technical and supervisory staff will relocate from India according to Dr. Pawan Gupta, president of Vanashree. He expects 75-100 families to move here since the company will base its U. S. research center here as well. The families are considering setting up a residential enclave at the new Landings at Maple Bay in Buckeye Lake. “It’s going to be a difficultcultural adjustment for many families so having our own community will make it easier,” he said. The families could add up to 200 students to the Lakewood School District.

“We will welcome them,” Lakewood Superintendent Jay Gault told the Beacon. Gault believes the influxof new students will likely force the district to increase the millage of the levy that will be on November ballot. Vanashree itself is getting a 100 percent 20-year tax abatement.

There will be some jobs for local residents. Jayna’s engineering team is already working with several former Aquila engineers who headed that company’s effort in 2001-2002 to construct a gas-fired electric generating plant in Walnut Township. Local opposition and changing market conditions killed that project. “We can use a lot of their data for our project,” Jayna said. Several former Aquila engineers are expected to join Vanashree, likely handling community and regulatory relations.

Neither Gupta or state development officials expect this project to be as controversial as the Aquila powerplant. “Aquila was going to employ about 30 people,” said Warren Prosperity of the Ohio Department of Development. “Their impact on the local economy would have been very limited.”

On the other hand, Vanashree will be buying its entire feedstock, some 300,000 dry tons of baled switchgrass per year, from area farmers. Aquila’s feedstock arrived via a pipeline from out-of-state. Since round bales of switchgrass are tougher to handle than corn and soybeans, that’s a lot more jobs for area farm laborers and truck drivers, Prosperity said. He expects the millions that Vanashree will pour into the area farm economy to make a big difference in how residents feel about the project.

Vanashree wants to purchase at least 100 acres for its facility. The distillery footprint will take about 10 acres, according to Jayna. Another 40-50 acres will be needed for switchgrass bale storage. Jayna hopes to stack the large round bales fivehigh using custom designed equipment. The rest of the site will be used for switchgrass test plots and to provide a buffer for neighbors.

The project cleared a big hurdle when Walnut Township officials agreed with state and federal officials that it should be considered an agricultural operation. That means Vanashree is exempt from zoning. Liberty Township is still considering the issue.

“That’s a key issue with Vanashree,” Prosperity explained. “We can’t let the objections of a few people derail an important opportunity for the people of Ohio. This is a big deal. We’re getting the first commercial scale switchgrass distillery in the world.”

Siting the plant near Buckeye Lake isn’t an accident. Jayna believes the distillery’s “carbon footprint” can be near zero, thanks to Vanashree’s new osmatic hydroxygenation process. Most of the facility’s carbon dioxide will be produced during fermentation. Carbon dioxide will be contained in the fermentation vessels then cleaned or stripped. About 20 to 30 percent will be of sufficientpurity to be sold to soft drink manufacturers. In a typical ethanol plant, the lower grade carbon dioxide, a harmless gas, would simply be vented to the atmosphere.

Vanashree is designing the plant for the future, Gupta said, so it wants to address possible limits on carbon dioxide emissions now. That’s the rationale for its proprietary osmatic hydroxygenation process. Simply put, the excess carbon dioxide will be pumped in a high pressure pipeline to a diffusion system in Buckeye Lake. A network of pipes will be sunk in the lake to diffuse the carbon dioxide throughout the lake.

Vanashree scientists expect the combination of high pressure, size of the diffusion orifices, photovoltaic effects (sunlight) and the highly oxygenated lake water will convert the carbon dioxide into water and oxygen. In simple terms, the process strips off the carbon molecule, leaving two oxygen molecules.

Jayna is reluctant to provide more details, citing Vanashree’s multi-million dollar investment in the technology and its hope to earn millions in royalties as the process is licensed to carbon generators around the world. The shallow depth of Buckeye Lake is an important part of the process. It provides the required oxygen rich water environment, he explained.

Retired Millersport High chemistry teacher Tom Tweddle says the chemistry sounds about right. He added that while many carbon producers are considering injecting carbon dioxide into the earth, he believes Vanashree is the only one using a water diffusion process.

Jayna admitted to the Beacon that this will be the first full-scale test of the new tchnology. It’s worked in some shallow plastic pools outside their Pune lab, he said. But there is little that can go wrong, Jayna insisted.

The worst case, he said, would simply carbonate the lake like a giant dark green Mountain Dew. “It might feel a little tingly at first to swimmers and water skiers, but that’s about it,” Jayna said. Lake water would effervesce when disturbed just like when a soft drink is poured into a cup.

Both Jayna and Gupta claim the “slim possibility” of turning the lake into a giant murky Dew wouldn’t affect aquatic life. But ODNR biologist Dr. Nomar Fishen isn’t so sure. He’s concerned that the tingly water might stimulate the often lethargic Cyprinus carpio (carp) to breed more often, upsetting the delicate balance between carp and more sporting fishlike bass, saugeye and crappie. “If the Cyprinus carpio start breeding like rabbits on Viagra, we’ve got a real problem,” Fishen said.

One lake area entrepreneur is ready to turn the possible sparkling water into profits.Darlene Murphy plans to open a lakeshore spa at the Crow’s Nest B & B in Millersport. She’s already picked a name – “Tingling Waters.” She hopes to attract hundreds of visitors for a rejuvenating “spritz” in the lake.

But not everyone is ready to sign on to biomass energy, zero carbon footprints and tingling water. “Let’s not forget that we’re gonna have an ethanol refineryin our backyards,” said Nona Curry. “It might be called a distillery, but it looks like a refineryand probably smells like one too.”

She’s inviting residents to an April 1 meeting at Millersport Junior High School. “We’ve got to stop this switchgrass now before it spreads,” she said.