ITS OWN SWEET TIME 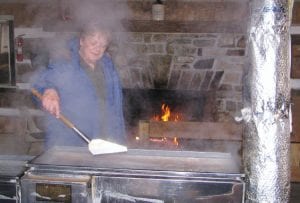 ITS OWN SWEET TIME

JACKSONTOWN- Corporate America works hard to create products
that look and taste like real maple syrup without actually being maple syrup.
Considering that real maple syrup is made completely of sugar maple sap with
nothing else added, why go to all the trouble to create artificialproducts with
dozens of ingredients, many with more syllables than substance? It may be that
society has lost its patience for the real thing.

“It’s a time-consuming art,” said Sara Lowe, education director at the Dawes Arboretum. Through March 10, the arboretum is celebrating “Maple Syrup Madness,” with free self-guided tours–there is a free narrated tour Saturday, 2 p.m.–through exhibits explaining the syruping process and its history, and a working maple syrup “sugar shack” in a log cabin on the grounds.

It takes about eight hours, said Lowe, to boil down 40 gallons of sugar maple sap to create one gallon of maple syrup. “In society now, time is more valuable than money,” she said. It’s certainly easier to churn out thousands of gallons of a maple syrup product based on corn syrup or table sugar than to wait for finicky trees to give up their sap a few weeks per year. “Nature’s still going at its own pace,” said Lowe. For the final week of Dawes’ syruping exhibit, it’s going even slower. This week’s cold temperatures have slowed the flowof sap considerably. 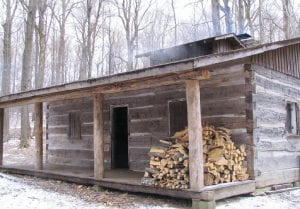 Lowe’s noticed that it’s tougher to schedule maple syrup tours at Dawes around busy families’ schedules. During the week, particularly, it seems like sports and other extra-curricular activities absorb most children’s and their parents’ free time. She’s had to compensate by creating programs that are inclusive of all age groups as the concept of “dropping off the kids at the arboretum and coming back for them later” is a thing of the past. Lowe’s happy that Dawes’ maple syrup exhibit has maintained its popularity, despite everyone’s hectic lifestyle.

She speculates that the time necessary to create real maple syrup and the number of trees needed to produce a significantamount are factors in what she’s noticed as a reduction in the number of sugar shacks in Ohio–especially Central Ohio. According to the Ohio Maple Producers Association, it takes at least 500 taps to produce enough maple syrup to generate appreciable income. Considering that each tree generally only accommodates one to three taps, that’s a lot of trees!

There’s plenty of instructional material at Dawes for those who would like to try making their own syrup, even if it’s just a gallon or two. The ingredients are simple–sugar maple sap, heat, and time. “It’s the season for warming up the house,” said Lowe.

The most common question Lowe hears from people taking the tour is “what is maple syrup made from?” Many people think syrup’s brown color is somehow added to the syrup. The color is created from the naturally occurring proteins within the sap, which turn golden as they are heated. The lighter the color, the higher the quality.

According to the Ohio Maple Producers Association:

+ Ohio ranks fourth or fifth each year among the 12 maple product producing states in the U.S.

+ There are currently approximately 900 families that produce nearly 100,000 gallons of maple syrup each year. This is approximately a $5-$6 million boost to these Ohio families’ income.

+ Maple spread, maple sugar candy, granulated maple sugar, and small containers of syrup are a welcome specialty gift and greatly appreciated addition to any holiday basket. With only a slight adjustment in ingredients, pure maple syrup or maple sugar can be substituted for cane sugar in many recipes.

+ Current Ohio demand for maple products exceeds its annual production. Purchase for repacking purposes from other states and Canada fills Ohio’s extra need. This fact clearly signals the available market open to yet more Ohio woodland owners who might choose to diversify in the direction of maple products. While start up costs may seem significant,rapid recovery of these expenditures is possible due to the expanding local, interstate, and world wide desire for maple products.

Possibly, as everyone’s schedules continue to pick up
speed, people will develop more of an appreciation for the finer things in life
that take time–like maple syrup!