Retrievers put on a show at Hartford Fair 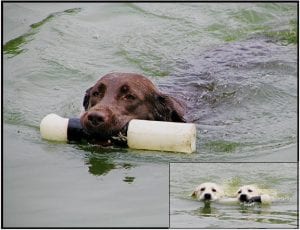 CROTON – A remote controlled device launches plastic “birds” high into the air and into a small pond near the Hartford Fair’s camping area. Dog trainer Donald Butts’ chocolate Labrador retriever, named “C-C,” nervously awaits the command to chase it. Butts calls the dog’s name and the lab makes a flying leap for the water and swims to the floating plastic bird, to the delight of many onlookers.

“This is all for the kids,” said Butts, owner of Mt. Perry’s Blue Ribbon Labradors, who each year brings nearly a dozen welltrained labs and several puppies to the fair. The dogs put on an impressive show for anyone willing to stray from the fair’s beaten path. Monday was sweltering hot and humid- -perfect weather for Butts to launch all the plastic birds into the pond at once, followed by the frenzy of nearly a dozen of Butts’ retrievers soaring into the water after them. “That’s always the grand finale,” he said.

Butts trains and sells Labrador retrievers of most varieties at his Mt. Perry business, which can be contacted through www. blueribbonlabs.com. 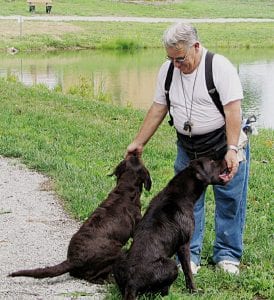 According to retrieverguide.com, Labrador retrievers have a fairly recent history. The Labrador retriever wasn’t recognized by the British kennel club until 1903 and didn’t make its debut in the United States until 1917. They were originally called the lesser Newfoundland dog or St. Johns dog when they were first brought to England in the early 1800s.

The Earl of Malmesbury coined the name Labrador retriever.

English fisherman settled in Newfoundland in the early 1500s with their dogs, then called St. Johns dogs, to help in fishing; the dogs would retrieve the fishcaught in the nets. The St. Johns dog loved to work– a strong quality of today’s Labradors.

Time l ine of the Labrador retriever: • In 1800 the dog was first imported into England to a few wealthy British sportsman. • In 1809 the Earl of Malmesbury used the St. Johns dog in shooting events. • The second Earl of Malmesbury played a big part in keeping the Labrador as we know it today alive when he started the first Labrador club and bred dogs until his death in 1841. • Around 1835 the fifth Duke of Buccleuch set up kennels in Scotland independently of the Duke of Malmesbury and the name Labrador was recorded in 1839. • Late 18th and early 19th century breeders interbred various retriever breeds hoping to develop the dogs’ hunting and retrieving capabilities. • By the 1880s the original St. Johns breed was almost extinct until an unexpected meeting of the third Earl of Malmesbury, the sixth Duke of Buccleuch, and the twelfth Duke of Home saved the breed. • Two liver color puppies were born in 1892. • In 1899 the first ever yellow Labrador retriever was born in a litter. 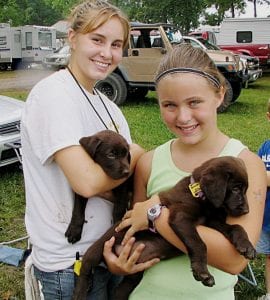 • In 1780 the Newfoundland dog became extinct because the governor of the land declared that any family could have no more than one dog to alleviate sheep worrying. There was a higher tax placed on females which led to female puppies being killed at birth.

• In 1895 the quarantine act prohibited dogs from entering into Great Britain without a license and it imposed a strict six month quarantine.

• By the 1930s the St. Johns dog was rare in Newfoundland until the sixth Duke of Buccleuch began importing dogs to keep the breed going around 1934.

• Finally in 1903, the Labrador was finally popular enough to be recognized by the British kennel club in England.

• By 1916 the Labrador retriever was firmly established in England and new colors, such as chocolate, were introduced.