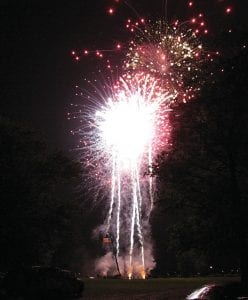 Planning, primarily by public safety agencies, for the community-funded show began nearly a year ago. This was the fifth year that the fireworks were launched on the edge of the lake at Fairfield Beach. ODNR’s dredge office serves as the command center, coordinating local, county and state public safety agencies. This year Licking County installed a satellite dispatching center (see photo to the right) to handle all calls/dispatches for the agencies assigned to event, ranging from Buckeye Lake Police on the north to the Fairfield County Sheriff’s office on the south. 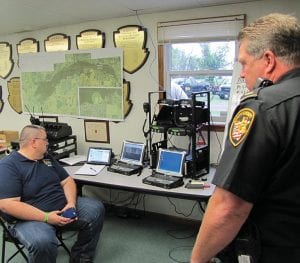 The multi-agency cooperation was evident Wednesday night. Millersport had an engine and squad stationed at the command center. Plus its fire boat patrolled the clear zone around the launch site. Thurston/Walnut Township Fire Department also stationed a medic unit at the command center. Richland Township provided a grass truck in case falling embers ignited grass around the launch site.

Dozens of park officers from state parks all over central Ohio patrolled both the Fairfield Beach and North Shore boat ramp parks on foot and ATV’s. They were supplemented by some Wildlife officers and Buckeye Lake Police at the North Shore and Fairfield County deputies around Fairfield Beach. ODNR’s Law Enforcement Chief was at the command center.

Watercraft officers had primarily responsibility on the water. They were assisted by the Coast Guard Auxiliary. The lake was divided into two sections along the clear safety lane running from the North Shore to Fairfield Beach just west of Cranberry Bog. Each division was overseen by a supervisor. 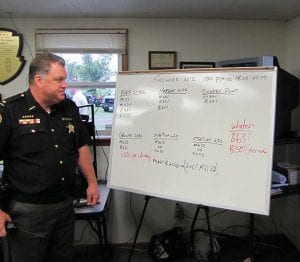 Twelve Fairfield County deputies were assigned to the event. Last year’s post-event critique identified a parking problem on Rosewood Avenue with vehicles pulling partially off the road to watch the show. With vehicles doing that on both sides of the road, it was nearly impassable for emergency vehicles. So this year, a deputy on a bicycle was assigned to keep Rosewood clear for emergency vehicles.

Attention to detail is critical. For example, deputies were checking Wednesday evening before the fireworks show to ensure that the one remaining former lion cub living in Fairfield Beach was secure in its cage.

The command center closely watched the weather Wednesday evening via radar and consulted with a Columbus television station meteorologist about storms moving in from the south. Light rain won’t affect the show, but lighting and high winds pose safety threats. Moving the show earlier or later is the preferred option since the mortars are loaded and wired on-site. Pushing the show back a day is also a poor option. BLASST’s long-time fireworks company – Hamburg Fireworks of Lancaster – had shows in both Pickerington and Westerville on the 4th. 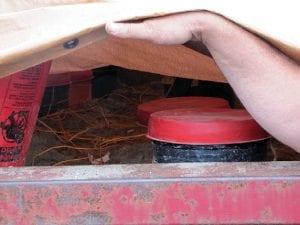 A decision was made to start the show 15 minutes early to avoid possible lighting. A light rain started a few minutes before the show, but stopped a few minutes later over the launch site. Rain was much heavier over the lake and the North Shore, drenching many spectators.

Thanks to detailed planning and execution, this year’s show went off without a hitch. 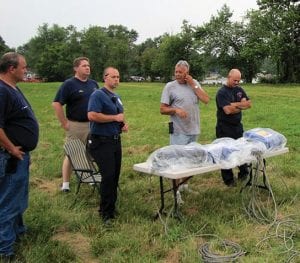 Anything larger, Jolly said, would damage nearby buildings. Most of the show consisted of four, five and six inch shells. The finale lasted two minutes. Before the smoke cleared, his 10+ man crew was starting a five hour teardown so most of the equipment could head to Pickerington or Westerville. 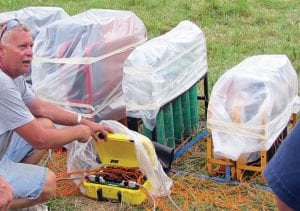