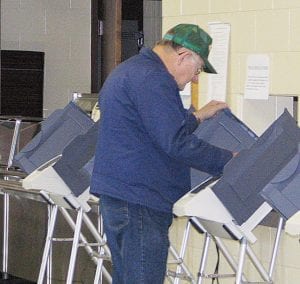 LANCASTER- Liberty Township Trustee incumbent Ivan Ety said there were “a couple nerve-wracking days” before the election, but in the end there was no need for him to be stressed. Ety won a fifth term with 579 votes, according to unofficial results from the Fairfield County Board of Elections. Ety defeated candidate Ron Galliher, who earned 425 votes; candidate and former trustee Dave Keller, who earned 301 votes, and candidate Randy Kemmerer, who earned 283 votes. Ety attributed much of his success to all the people who got out and spoke with citizens personally on his behalf. A political sign, he said, is no substitute for meeting with people face to face. “They don’t count signs, they count votes,” said Ety, who was clear that none of his supporters interfered with any of his opponents’ political signs, despite claims by his opponents of sign stealing and vandalism among the candidates. Looking to his next term, Ety anticipates another four years of dealing with growth, such as new residential subdivisions, within the township. “It’s hard to say what’ll pop up,” he said.

Elsewhere in Fairfield County, it was a strong election for the incumbents:

Walnut Township voters were in a generous mood as they approved two one-mill fire/EMS replacement levies. Both levies will be continous. The first one was approved 866-680. Some voters obviously thought one was enough as the second levy was approved by a 819-721 vote.