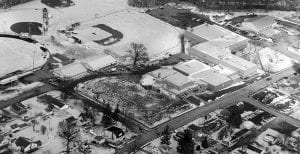 The former Liberty Union Middle School is now just a memory. Demolition debris is still being removed, but the building has been razed. The smokestack will be taken down soon. The cleared site will be paved for a new parking lot this spring. Beacon aerial photo by Charles Prince.

In other business, Superintendent Paul Mathews said the structural steel is going up for the new maintenance building. It’s the district’s last major structural project.

He said there are some issues with the roof at the new middle school so a reinspection of the membrane roof system is planned. The problem with hot water clogging some filters has been resolved. “There were water balance issues,” Mathews said. “Rate was about twice what is should have been. It has been adjusted.” That appears to have solved the problem.

Supplemental contracts were approved for:

Resignations for retirement were accepted from elementary school teacher Becky Blackstone and head high school cook Shelby Hieatt. Both were thanked for their many years of service to the district.

Taylor Barnett and Sam Fisher were honored as the students-ofthe month. Barnett is the daughter of Graig and Susan Barnett. The senior is a four-year varsity soccer player, a 4H member and a member of the Interscholastic Equestrian Riding Team. Fisher is the sone of John and Tamara Fisher. The sophomore participates in football, wrestling and FFA.

The new county superintendent, Dan Montgomery, attended the meeting. He plans to restart an annual county-wide meeting for school board members this May.

“You’ve invested well in your district,” he told board members.