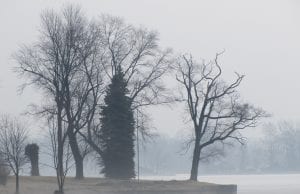 LAKE AREA– It’s been a long time coming, but Buckeye Lake is finally beginning to thaw, opening up areas of liquid water among all the remaining ice. Even though temperatures climbed into the 50s this week after a long winter of subzero cold, most of the lake remained frozen over as of Wednesday. However, some signs of spring are beginning to show, particularly along Buckeye Lake’s banks.

ODNR spokesman Matt Eiselstein said it’s not uncommon for some ice fisherman to lose equipment into the lake as the ice beneath them gives way. “Debris that falls into the water is typically treated as litter and owners can be cited,” he said.

However, Eiselstein said ODNR does try to work with owners of equipment left on the ice that might have been caught off guard by the weather to discourage individuals from attempting to remove their gear from unsafe ice. “There is no regulation dictating when equipment should be removed,” he said.

According to accuweather.com, the extended forecast shows temperatures mainly in the 50s and some 60s through the rest of March. All high temperatures will be well above freezing. The first 70-degree day is currently forecast for April 19. 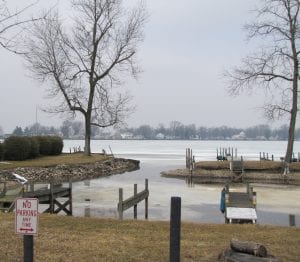 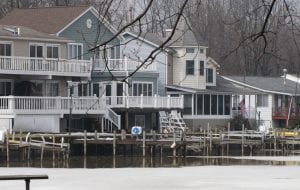