‘If Millersport needs us, we will be here’ 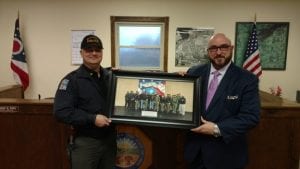 Millersport Police Chief Mark Consolo invited Lowe to the council meeting to thank him and the multi-jurisdictional team that sweep the Millersport area three weeks seeking 14 drug traffickers. Consolo gave Lowe a framed photograph of the 30 officers that took part in the sweep.

Lowe said the process started nearly a year ago when Consolo requested help, passing along information developed by the Millersport Police Department. “They were very patient,” Lowe added.

“Most of our work is behind the scenes,” he explained. “We are trying to address sources of supply.” That takes time and multiple buys, Lowe said.

The investigation generated 14 warrants. A man wanted by the State of California on a murder charge was removed from the Lynn Avenue apartments. Lowe said he was bringing in pounds of meth into Fairfield County. A couple living in Millersport was a major heroin supplier in the area. Lowe said most of those arrested are facing trafficking charges which will keep them out of the area for years. 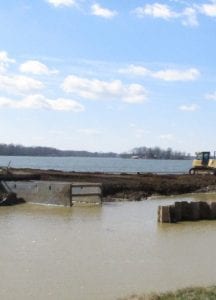 Lowe, who came to the Unit several years ago, spent 18 years with the Ohio Attorney General’s Office Bureau of Criminal Investigation. He emphasized that he believes in collaboration across the county, not just working in Lancaster and Pickerington. “We will continue to work with Millersport and show them support,” he pledged.

Lowe was surprised by the gift photo, insisting, “We’re just doing our job.” He said the photo will be hung in the Unit’s Lancaster office. He encouraged everyone to pass on tips or information and provided his cell number – 740-808-0100.

Matheny admitted that the investigation’s slow pace made him skeptical. “You came through and it is awesome,” he told Lowe.

In other business Tuesday night, Fire Chief Bob Price said the new living quarters at the Fairfield Beach station are now fully operational. Firefighters moved in over the weekend. He invited anyone interested in seeing the renovated station to stop by after 9 a.m. on Sunday, March 18. Firefighters will be doing Spring Cleaning most of the day to clean up after the construction.

The entire project was funded by donations, Price emphasized. No fire levy funds were used. Most of the funds came from a $175,000 bequest from the estate of Thornville resident Jack J. Artz. He left $175,000 each to Thorn Township, Thorn Township EMS, Perry County Sheriff’s Office, Millersport EMS, Licking County Humane Society and Hebron Police.

Price said the station will be dedicated at 11 a.m. on Saturday, May 5. Tours and free refreshments will be available. The station is manned 24/7.

Price also reported that lighting in the equipment bays at both stations has been converted to LED lighting which should save electricity. Insulation has been improved in the Fairfield Beach bay which will reduce energy usage.

Price said the department will have ODNR’s shallow water jet boat again this boating season. It will be launched once the lake level becomes deep enough. Tauro Township donated a small jon boat to the department. It will be part of the special operations trailer.

The increases will allow Millersport to earmark the revenue from Buckeye Lake Village sales for capital improvement projects. AS that fund grows, Popo would like to use some of the funds to pay off the two water loans that allow prepayment.

Popo and Matheny outlined their discussions about the possibility of paving all the village streets and completing all the water and sewer projects at once. The estimated cost would be about $7.5 million. To get all the work done would require a large loan and for voters to approve a new five mill street levy. Neither want to borrow money longer than the expected life of the improvements. For streets that would be 10 years. Popo said U. S. Department of Agriculture’s Rural Development loans are likely available and currently have a very attractive interest rate under 2.5 percent.

The possible new street levy would be limited to repaving and keeping water off the roadways. Repaving every village street is estimated to cost about $1.5 million.

Matheny brought up the condition of the canal along Canal Drive. Sea walls are failing and the Canal Drive guardrails in some areas are leaning toward the canal.

“I’ve been told we can’t give it back to the state,” he said. “It’s starting to cave-in now.” He believes the village accepted the canal around 1982. He believes it would cost more than $2 million to fix it. Matheny doesn’t believe a small village like Millersport should have to fix a canal that is part of a much larger state-owned lake and park.

“I don’t want to put any lare amount in that,” he told council members. “I don’t think it should be our responsibility.”

The second public meeting to prepare an application for a $450,000 Neighborhood Revitalization Grant is set for 7 p.m. on Tuesday, March 27, at the village hall. Public participation is a critical part of the scoring process for the grant. Discussion will focus on project priorities.