ICE WOULD BE NICE

Lake not ready for ice fishing yet 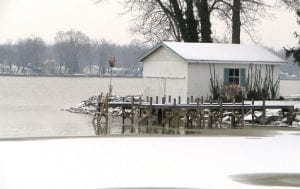 LAKE AREA- Local bait shops, the Buckeye Lake State Park office, and even The Beacon office are receiving lots of calls from anxious anglers, wondering if the ice on Buckeye Lake is thick enough for ice fishing. The short answer is– not even close! While some of the canals and even Crane Lake have some ice, anyone wanting to fish on them is bound to have that sinking feeling.

“There’s lots of people waiting for it,” said Emma Ramey of Amy’s Bait Shop. “Last year, there was no ice at all.” Ramey advised everyone to stay off of Buckeye Lake ice until it’s at least four or five inches thick. Most serious anglers, she said, will use an auger to drill into the ice and check its depth before venturing away from shore to set up camp.

Rich Zweifel, a fisheries biologist with the Ohio Division of Wildlife, agreed that four to six inches of ice depth is safe for most people. “Personally, I like it thicker than that,” he said. He warns that rain will erode the ice and it takes a good two weeks of consistently below freezing temperatures for safe ice to form. Obviously, if temperatures plunge to zero degrees or below, it won’t take long. 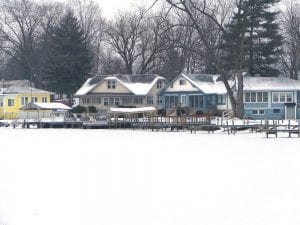 Zweifel said 20 inches of ice is necessary to support a large vehicle, like a car or small truck, but ATV and snowmobile riders can feel secure on top of nine to 12 inches. But, always be careful. “The ice (thickness) will vary in different places,” he said. Just because one area of the lake will support ice fishing, it doesn’t mean they all will.

Assuming anglers are granted their icy wish sometime this winter, Zweifel said they can plan on pulling lots of Saugeyes, Walleyes, Crappies, and Bluegill from the cold depths. And, with a fisherman’s luck, maybe even a catfish “if you drill a hole over the top of one and drop bait on its nose,” he said. The peak biting hours are morning and sundown.

Personally, Zweifel understands why so many anglers are champing at the bit for fish to chomp on their hooks. “Hunting season’s over. There’s not much else to do this time of year,” he said. “It definitely cures cabin fever!”