How to protect yourself from scams 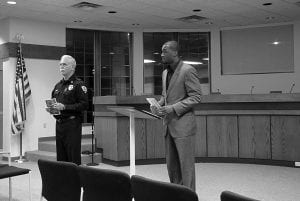 HEBRON – A small crowd recently turned out for a seminar on Elder Fraud sponsored by the Hebron Police Department.

“We get a lot of calls about frauds and scams,” Hebron Police Chief James Dean said. “Prevention is a lot easier than the cure.”

“Seniors are targeted,” he said. The reasons are isolation, attractive assets and a reluctance to report fraud.

• Fake check scams: Someone sends you a check – sometimes it is an overpayment for something you are selling – and asks for you to deposit and return some of it via a wire transfer. There are a number of pitches, but the outcome is always the same. The check turns out to be counterfeit and any money wired is be lost. Never wire money to a stranger.

• Grandparent scams: Con artists call or e-mail, posing as a grandchild that’s in a jam outside the country and needs money via wire transfer. Often they ask the grandparent not to tell their parents about their trouble. Any money wired will go to the scammer and is irretrievable. Consult with a trusted family member before wiring any money to a relative.

• Investment fraud: You might be offered a “risk-free” investment that is anything but risk-free. All investments involve some level of risk so consult with trusted family members and friends before investing.

• Prizes/sweepstakes scams: You could get a call, letter or e-mail claiming you have won a lottery or some other prize that asks you to pay some kind of fee to collect your prize. Often, you are asked to wire the fee.

• Phony charities: You may receive calls, letters or e-mails asking for a donation. For example, calls seeking donations for the Hebron Police Department have been reported. Dean said residents have already contributed to the department via their taxes and the department does NOT seek donations via calls or letters.

McGrady said Ohio law gives consumers three days to cancel any transaction of $25 or more that occurs at a location outside the seller’s regular place of business, such as the consumer’s home, a fair booth or a hotel meeting room. Sellers must also notify consumers of their right to cancel, are prohibited from starting any service or selling any loan agreement during the three-day period and must provide a refund within 10 days if the contract is cancelled.

He also listed the five R’s:

• Remember your rights, particularly the three-day cooling off period;

• Reconsider the purchase, don’t fall for high pressure; and

The pamphlet listed some signs of a scam:

• You are asked to send money via a wire transfer;

• You win a contest you have never heard of or entered;

• You are asked to pay a fee to receive a prize;

• Your personal information is requested over the phone or via an e-mail;

• A large downpayment is requested; and

• A company refuses to give written information.

McGrady said new scams are constantly being tried. One is a demand to pay a traffic ticket for a violation caught by a camera. Camera citations are sent through the mail, but be certain that it’s from a real city and a place where your vehicle could have been photographed. If you have any doubts, contact the city issuing the citation to make sure it is legitimate.

McGrady said scammers never stop trying to take your money. Investigators in his office frequently get scamming calls at work.

Door-to-door solicitors need a permit in most communities including Hebron. Ask to see their permit or call police if you have any concerns about solicitors.

To report a scam visit www.OhioAttorneyGeneral.gov or call 800-750-0750 or contact your local police department.