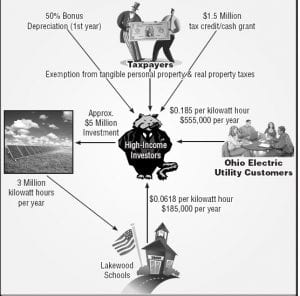 There’s a lot more than just harnessing the energy of the sun to create solar power ‘savings’ for Lakewood School District. The huge hurdle is simple economics. Solar photovoltaic power costs about $0.40 per kW hour compared to about $0.10 per kW hour for power purchased from AEP. Somebody else must pick up that extra $.30 per kW hour to create Lakewood’s ‘savings.’ Those ‘somebodies’ are the customers of Ohio electric utilities, and taxpayers locally and nationally.

It gets pretty complex so we created the above illustration to make it easier to follow. It starts with high-income investors who will invest about $5 million for Lakewood’s system. The actual amount is confidential as are a number of the project details. The $5 million figure is based on solar industry consultant SolarBuzz’s estimates. Tipping Point expects the system will produce three million kW hours per year for Lakewood. Lakewood will then pay Tipping Point, or whatever investor group that ends up owning the contract, $0.0618 per kW hour. That fee will increase three percent a year over the 20-year contract. Power that Lakewood can’t use – it’s generated in the summer when school is out – will go to AEP, reducing Lakewood’s AEP bill for the occasions when the solar system isn’t generating enough power to meet Lakewood’s needs. Lakewood’s payments and AEP credits fall far short of paying for the system.

The big money comes from Ohio electric utility customers and taxpayers. Every thousand kilowatt hours generated creates a renewal energy credit (REC) that can be sold. Ohio electric utilities purchase REC‘s to avoid paying penalties set in state law for failure to generate enough power from renewable sources. The most recent price for in-state Ohio REC’s was $185 which works out to $0.185 per kW hour. That price can go up and down depending on the demand from Ohio electric utilities. For much smaller facilities (10 percent of Lakewood’s capacity), AEP is paying $262.50 per REC in 2012 and 2013. Electric customers pay for the REC’s through higher rates.

The income tax benefits are very substantial. The 30 percent federal income tax credit or grant will be $1.5 million for the estimated $5 million investment. Taken as a credit, that shelters (no federal income tax due) approximately $4.3 million of taxable income for an investor in the top federal income tax bracket (35 percent). The 50 percent bonus depreciation in the first year ($2.5 million) will reduce remaining taxable income dollar for dollar (up to $2.5 million). The rest of the investment will be written off or depreciated over the next four years. The payments from Lakewood and for the REC’s is just gravy. That income is sheltered by the rest of the depreciation and by doing new projects for new tax credits.

We can’t afford very much of this ‘green energy.’ It truly is burning our ‘green.’ It also encourages non-productive investments. This is the second solar project in Licking County (Southwest Licking was the first) and others are in the wings. Typically that $10 million or so investment would generate jobs, taxes and additional investment by suppliers, service companies and customers. That’s not happening here. Employment will be limited to installation and a fractional person for maintenance. More than $2 million will likely go to China for the solar panels. This so-called ‘green economy’ is killing our economy. We can’t compete by making non-productive investments.