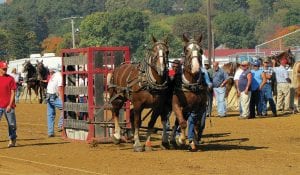 LANCASTER –  Hor seman John Barnes of Miamisburg, Ohio was obviously far more interested in readying his draft horses for the Fairfield County Fair’s horse pulling competition than answering questions about it, but he was a good sport. “It costs a bundle,” he said. Raising mammoth draft horses for the sole purpose of pulling as much weight as possible isn’t cheap, but as far as Barnes is concerned, it’s worth every penny. “It’s something you’ve got to love,” he said. Barnes definitely loves the sport, and his horses were clearly exited to be led to the skid. Barnes entered his first horse pulling competition when he was seven years old. “Now I’m 77,” he said.

Bar nes said it takes roughly four years to raise a pair of colts where they can begin pulling anywhere upwards of 5,000 pounds on a skid. He said horse pulling takes plenty of equipment and an absolute devotion to training. It’s just a matter of having them pull as much as possible, as often as possible. “You just keep going and going and going,” said Barnes. 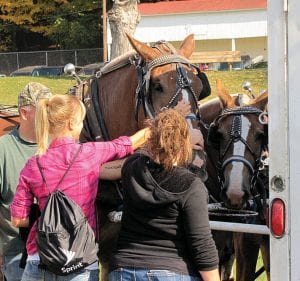 According to horsepull. com, no one should worry for the horses’ safety. Properly trained draft horses can’t wait to pull the skid. “(Horse pulling) is a sport with a team of equine athletes. The work that goes into them to get ready for competition is endless.

“The best horses in competition are worked every day to keep their muscles and tendons in great shape to pull heavy loads. They are no different than a weight lifter or football player getting ready for their given sport. Some folks that don’t understand the sport think a horse pulling weighted loads is harmful to them. Only in a marathon would a horse’s heart rate and blood volume be highly affected. Ask any veterinarian! These draft animals are bred for their strength and agility to pull heavy loads and these short distances they pull does not raise these levels enough to affect them. They are so proud of themselves when they complete a pull. Watch them strut their stuff when they are unhitched.” 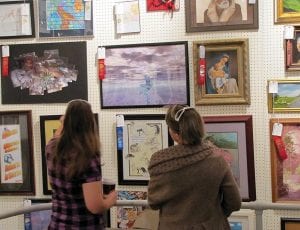 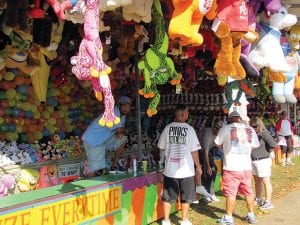 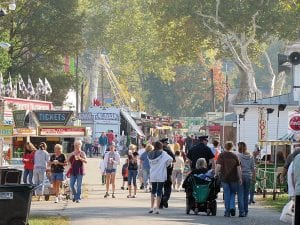 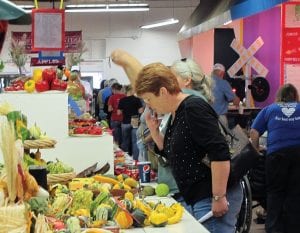