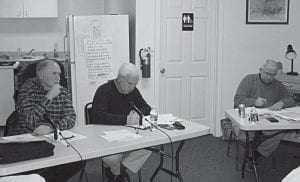 JACKSONTOWN – John Holman was sworn in Monday night as a Licking Township Trustee. He will serve the 10 months remaining on Joe Cooper’s term.

Cooper and his wife completed their plans to retire in Tennessee when they sold their home in January. Holman was selected by Trustees Joe Hart and Dave Miller from a group of eight applicants, following private interviews with each candidate.

Delagrange and some other neighbors want trustees to prohibit parking there. However, the township’s current zoning ordinance doesn’t specifically address the issue. Trustee President Joe Hart has expressed concern about taking action to prohibit commercial parking there while ignoring it in the rest of the township.

Last summer, Hart and Miller drafted a zoning amendment that would allow commercial parking in residential areas as a conditional use. They believed Cooper, who was the board’s liaison to the two zoning boards, was going to ask the zoning commission to help draft the conditions that would determine whether parking would be permitted.

“We want to develop a process,” Miller told Delagrange. “We gave you (zoning commission) a chance to come up with something and got nothing.”

“All your board had to say is ‘no,'” Miller added.

Hart explained that he and Miller simply want to avoid putting the township in a position where they could be charged with “selective enforcement.” “We have never said that we’ve approved parking in that field.”

The issue with the zoning commission is further complicated by last week’s resignation of chair Frank Davis. Hart plans to attend the commission’s next meeting to provide another chance for the body to have input on the conditions that the Board of Zoning Appeals will have to consider when reviewing parking requests.

Millers announced that he is representing townships on the county’s Economic Stimulus Task Force. A priority list is to be published by March 20. Miller is the president of county township association.