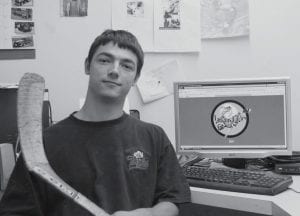 MILLERSPORT- Jim “Jimmey” Betts, Jr. is eternally grateful his father refused to listen when people told him that no young hockey player from Central Ohio could ever make it to the pros. The 22 year old Millersport native was recently selected to be a player and graduate assistant coach for the Varkaus Eagles, a professional Division II FIHA hockey team based in Varkaus, Finland. Betts leaves for Finland Aug. 8.

Several years ago, Betts played minor league hockey for the Albany, NY based Hudson Valley Eagles. “The owner of that team is the owner of (the Finnish) team,” he said. The owner made him an offer he couldn’t refuse. As a player and assistant coach for the Varkaus Eagles, Betts also receives paid college tuition, a car, and a free apartment. “This ought to be good,” he said. “It’s the best of all worlds.” Betts plans to study international business at Finland’s Savonia University.

Fortunately for Betts, most of the Finnish speak English fluently. Some of Finnish senior citizens don’t, he said, but for the most part Betts doesn’t expect to have any difficultycommunicating in his new land. He’s prepared for cold weather. While Finnish summers are similar to ours, the winter temperatures can drop to 30 below zero. He currently plans to live in Finland for two to four years.

“This’ll be the furthest I’ve been from home,” he said. He’ll miss his family and friends, but, “I’d feel worse letting this opportunity pass.” Since playing in New York, he’s been working for his father at Jim’s Custom Paint & Collision in Millersport. While Betts enjoys the work, he’s ready pursue his passion, even if it’s thousands of miles away.

“So many people said someone from Millersport could go pro,” said Betts’ father, Jim, who will miss his son, but, “If I didn’t give him this chance, I’d kick myself the rest of my life.”