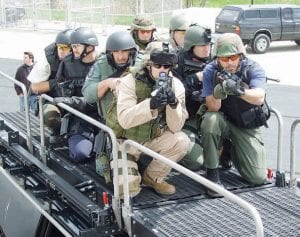 Law enforcement and military officersfrom across the nation followed a day of anti-terrorist training at Hebron’s Buckeye Scenic Railway with a day of containing a mock terrorist attack on a Boeing 727 jet at Bolton Field Airport.

HEBRON- More than 20 armed men surrounded buses and train cars full of people at the Buckeye Scenic Railroad station in Hebron. While it looked like something out of a Hollywood movie set, or someone’s worst nightmare, it was actually a day of field training for the 727 Counter- Terror Training Unit, which is a week long course for law enforcement led by Commander Scott Wagner, a Columbus State Community College professor. 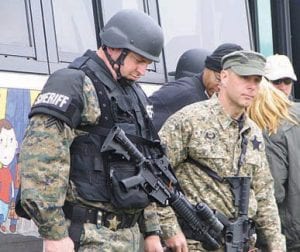 Wagner said the law enforcement officerslearned skills such as literally learning how to hang on to their guns in a confrontation- -long machine guns can be grabbed and yanked away by an aggressor under certain circumstances. The law enforcement officials also learned how to deal with firing guns within close proximity of each other, even if the target is distant. It’s one of those things, s a i d Wa g n e r that sounds easy to do, but can be surprisingly difficultin chaotic situations. Guns used in the training only shoot nonlethal plastic BBs. 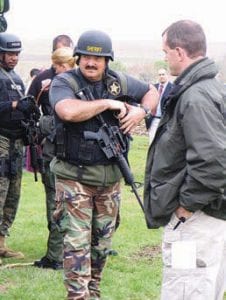 At Hebron, the trainees learned the correct procedure for a containing a school bus, a public transit bus, and train cars in the event they are taken over by terrorists. Members of the Columbus State Community College police academy acted as innocent passengers. “You can’t just grab people off the street as extras,” said Wagner, adding that “extras” are witness to tactics and maneuvers that must remain military secrets.

Wagner’s next training class is in October, but this was likely the first and last field training session at the Buckeye Scenic Railroad site. Mark Cristenberry, the railroad’s executive director, said the site may be cleared and replaced by a bicycle trail on the old railbed. The field training will likely relocate to the Hocking Scenic Railway in Southern Ohio. “It’s not as convenient for us,” said Wagner, but it’s the closest site with an available train. 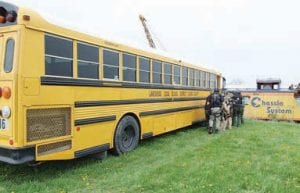