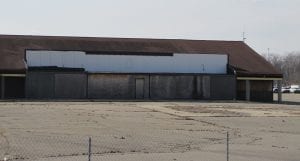 .BUCKEYE LAKE – Buckeye Lake Village’s financial crisis may go up in a puff of smoke.

The struggling village’s change of fortune is the result of being in the right place at the right time. State and local governments nation-wide are battling to balance their budgets. The federal solution – just borrow more – is not an option for most of them.

Recent reports that the State of Colorado took in more than $2 million in taxes in January from its very fledging recreational marijuana industry caught the attention of officials nationwide.

More than 20 states have legalized the use of marijuana for medical purposes, but Colorado is the first to legalize the sale of recreational marijuana. Buyers must be age 21 or older and are limited to purchasing one ounce per visit.

Colorado off icials are expecting to take in more than $184 million in tax revenue from marijuana in the next 18 months. In recent weeks, the financial press has been buzzing with reports about the benefits from legalized marijuana for governments and investors. An analyst writing at Yahoo Finance sees “a tremendous opportunity” over the next 10 years.

Ohio is not one of the 20 states already permitting the use of marijuana for medical purposes, but a ballot initiative titled the Ohio Cannabis Rights Amendment could be on the Nov. 4 ballot this fall. Ohio was a relative late-comer to legalizing casino gambling and lost millions in taxes on the industry to Indiana, West Virginia and Michigan.

“We’re not going to make the same mistake twice,” a top state official told The Beacon. He insisted on anonymity since discussions with legislators have just begun. “So far we haven’t found a sponsor,” he said. “Everybody seems to be a bit leery of being known as Ohio’s Don Juan or Mary Jane. So we’re looking to announce a group of sponsors at the same time. There is safety in numbers.” 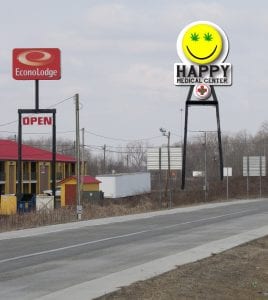 Meanwhile, some state officials believe they have found a provision in state law – opponents call it a loophole or worst – that would allow the sale of marijuana for medical purposes at one location before voters weigh in on a potential referendum.

“We would call it a clinical trial,” said Dr. Peter Doobie who said his name is pronounced “dough bee.” “It would give us some real world data for voters to consider this November or next May,” he added. “This is a very emotional issue and we would prefer that voters make their decisions on facts, not emotion.”

Officials have their eye on the former Buckeye Lake Truck Stop. It has excellent visibility from I-70, plenty of parking and is surrounded by restaurants to help patients battle the munchies. Zoned Out Properties of Berkley, California, already has an option on the property. Officials are using the codename “Toke Stop.”

Doobie’s colleague, Richard Schwagg, said very preliminary discussions have been held with Advanced Cannabis Partners about running the clinic. ACP would provide the staff who would assess whether patients qualified for medical marijuana. Schwagg acknowledged that the criteria for treatment hasn’t been very demanding in other states, particularly California. “I don’t see any reason to change that here,” he said. “Our focus is more on do no harm than on specific health benefits. It’s the tax money we want. We can’t afford to lose millions to our neighbors again.”

ACP spokesperson Ron Bogart told The Beacon, “We want to be a good neighbor and support our local community. For example, on weekends we’ll allow local non-profits to sell goods to our patients. We envision setting up a system like the coffee break canteens at the interstate rest areas. We’ll set up a rotating schedule that would let the Girl Scouts sell during their cookie season, baseball and softball teams after that and so on.” Bogart emphasized that youth groups must have adult chaperons present. He said the Friends of the Buckeye Lake Library had already inquired about selling their famous pit beef sandwich. Participation is strictly limited to non-profits. Bogart said weekends will be filled on a first come basis and encouraged organizations to fax letters of interest to his attention at (740) 928-7960.

Buckeye Lake Village officials were reluctant to discuss the issue on the record. “I don’t want to go out on a limb and support it, only to have the state cut it off,” one said. “I might have blown a stick or two when I was younger,” another said. “But that doesn’t mean I’m going to stick my neck out there until I know we have something.”

That “have something” could provide a nearly million dollar fix to the village’s budget. Harry Callahan of the Ohio Department of Public Safety said officials have read about the village’s need for a new police cruiser. “If this comes through, we’ll turn over four new OSHP cruisers to the village immediately,” he promised. “We can’t locate our first marijuana clinic in a village where the cruisers are more likely to be in the shop than on the road.”

Doobie promised more “swag” to the village. “You would get 40 percent of the local excise tax with 60 percent going to Licking County,” he said. Your share should be at least $250,000 a year, particularly if ACP has a ‘Dr. Feelgood’ signing off on the patient assessments.” Buckeye Lake would also have the option of assessing a maximum 10 percent “Munchies tax” on all restaurant sales within one mile of the clinic. “Think of all the travelers you could tax when they pull off the interstate to eat,” Doobie added.

There are also some employment opportunities. Bogart said ACP expects to start with about 24 patient “navigators.” The job requires a high school diploma or GED and about a week of on-thejob training. Navigators, who will work under the direction and authority of the medical director, will handle most patient assessments and help patients qualify for Obamacare reimbursement. The salaried positions start at $29,000 a year.

There will also be employment opportunities for security professionals or as Bogart calls it, “Our Integrity Team.” He hopes to talk with some retired local police chiefs about heading the team. “Integrity and safety is very important to ACP,” he added.

A Columbus restaurateur already has an option to purchase the former Burger King restaurant. Samuel Kush hopes to license the Beatles song, “Yellow Submarine” to use as the name of his gluten-free sub shop. Kush plans to use hemp flour as part of his gluten-free blend.

Not surprisingly, not everyone is thrilled with idea of selling marijuana legally for any reason. Opponents have formed Residents Opposed to All Cultivated Hemp or ROACH for short. “This so-called ‘clinic’ will attract dopers from all over the country. They might be spending money in our restaurants, but the stoners will also be pulling out in front of other vehicles, causing hundreds of wrecks,” one ROACH member said. “We know it’s all about the tax money, but at some point we have to put our morals ahead of money,” another member said. “We’re selling our souls for a free ride. If the village needs more money, let’s get it the old-fashioned way. Cut expenses or ask voters to pay more taxes.”

Local residents will have an opportunity to have their say at a 7 a.m. hearing on Tuesday, April 1, in the Buckeye Lake Village offices on Ohio 79. Doobie said officials are willing to listen to everyone. “We’re not just blowing smoke.”