Here’s how it’s supposed to be done! 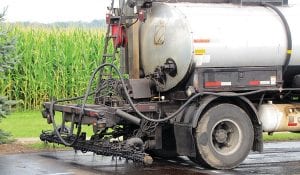 It’s been nearly a year since we demonstrated that Chemcote Inc. and M•E Companies were ignoring contract specifications and industry good practices on the Village of Buckeye Lake’s $756,000 street repaving projects. Our criticism has focused on the failure to use a tack or bond coat, to “thoroughly clean” the roadway before new asphalt is applied and to apply the specified thickness of asphalt.

We realize that some Buckeye Lake Village readers may not be familiar with a tack or bond coat nor proper repaving procedures. The Village of Hebron’s local paving project started late last week. Major ODOT contractor Kokosing Construction Co. of Fredericktown was the low bidder at approximately $80,000. The project includes repaving the municipal complex parking lot and resurfacing Lakewood Drive, Sands Drive and Canal Street. After planing the lot and the streets, Kokosing repaved the parking lot on Tuesday.

The above photos detail the process. At the top, a Kokosing tank truck sprays tack or bond coat on the “thoroughly cleaned” surface. The middle photo shows the entire surface free of debris and well coated with the tack or bond coat. The material is so sticky that it pulls anything off the paver’s tires as seen in the dusty tire tracks. Finally, the paving machine operators closely check its performance. In the bottom photo, one operator is checking whether this course of asphalt is level. The other operator is carrying a measuring stick in his left hand that is frequently used to check for the proper thickness. 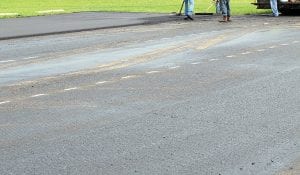 “We never pay for inspection services,” Village Administrator Mike Mc- Farland told The Beacon as he monitored the work. “We inspect it ourselves.” Years ago, McFarland said the village discovered that their engineering firm’s inspector had simply recorded problems with a project that weren’t disclosed until it had been completed. Once they learned that the inspector was only there to record problems, not correct them, the village saved the money spent for inspection and did it themselves. 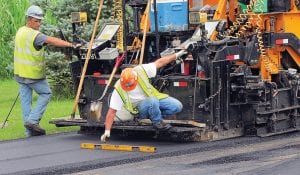