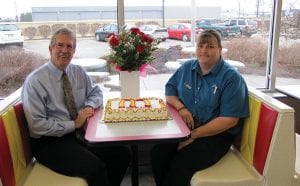 Hebron McDonald’s owner Don Kissack presents a cake and flowers to his General Manager Sandy Shaw, who was recognized as an “outstanding” restaurant manager Feb. 13.

HEBRON – Hebron McDonald’s General Manager Sandy Shaw thought she was going to a managerial meeting Wednesday morning. Little did she know she would be honored as an “outstanding” McDonald’s restaurant manager in the Ohio region, which includes parts of Indiana and Kentucky. Only 70 managers of 700 McDonald’s locations in the Ohio region received the recognition.

“It was a nice early Valentine’s Day present,” said Shaw, who’s managed the Hebron location for roughly two and a half years.

“She’s committed to the brand,” said Don Kissack, who owns the Hebron and Buckeye Lake McDonald’s locations. “She delivers quality service and has very high standards.”

Kissack said he and McDonald’s field service consultant Pablo Taura supported Shaw for the honor because she achieved superior results in selected areas of performance from turnover to sales increases and quality service.

“It’s people skills, really,” said Shaw, when asked what makes an “outstanding” manager. She said people skills are important when dealing with customers and employees. It’s important to maintain positive and professional relationships with everyone. “I think that drives it,” said Shaw.