Vietnam Veteran and Hebron Village Council member Jim Layton lead the ceremony. Layton said the Memorial was erected to honor all veterans who attended Hebron School.  Special recognition is given to the eight men that attended Hebron School and made the ultimate sacrifice for their country.  They are:

While Layton has lead the ceremony since the Memorial was erected, this year he was also the keynote speaker.  His talk follows:

“I have been the MC of this event from the beginning I am a Vietnam Veteran and a member of the American Legion Post 285.   This year I had the opportunity to visit England, France, Luxembourg, Germany and Austria. My father, Robert Layton and his brother, Raymond Layton served in WWII as part of Patton’s 3rd Army, 943rd Field Artillery Battalion XX Cops. They served together, in the same unit the entire tour witch was very unusual. My cousin, Tom Layton had, as part of his bucket list, wanted to travel the route that Bob and Ray followed through Europe during the war. I got a call from him several months ago saying since we were both retired it was time to make the journey!

To my surprise I did not hesitate and agreed to the plan! I could not think of a better way to honor our fathers. We had several letters from them during the war and some other items that made mapping the route fairly easy. So on September 9, our trip began. Our fathers started in England on to France through Utah Beach Normandy, Avranches, Sainte-Mere Eglise Le Mans, Paris, Rheims, Verdun, Corny and Metz. Then into Luxembourg and the Battle of the Bulge, then to Germany, Eagles Nest at Berchtesgaden, Bavaria and on to Munich.

We were mostly able to follow the route and here are some of our thoughts and observations: England has preserved their military history very well; we visited several military museums including Churchill’s war room, witnessed the Changing of the Guard, visited the Tower of London, and saw the Crown Jewels. Next we were on the train to Paris.

In Paris, we visited Eiffel Tower, Arch De Triumph, and several other sites. Next we rented a car and drove to Normandy (2019 is the 75th anniversary of D-Day), Cherbourg area, Utah Beach was where Bob and Ray came ashore in France. We visited several museums. I stood on the bank overlooking the Utah Beach and can’t imagine how anyone survived the landing.

Next it was on to Sainte-Mere Eglise, the church where John Steel parachuted in on D-Day and ended up hanging on the church steeple by his parachute. He survived the war and returned later in life to visit the church. Almost every town had at least two churches that were focal points of the town. Cathedral Notre-Dame in Rheims was the most impressive church I have ever seen with stained glass windows two stories high and huge. Also in Rheims we took a tour of the headquarters where the Germans signed the cease fire. I was surprised to learn General Eisenhower did not attend because the officer signing for the Germans was of a much lower rank than Eisenhower and he thought it would not be appropriate . In Verdun we visited the Citadel – a fortification carved into a mountain with a series of tunnels where the French and Germans fought a 303 day battle in WWI. A total of 377,000 French and 337,000 Germans were lost.

We drove next to Corny where Ray and we believe Bob received the Bronze Star Award. You see neither Ray nor Bob ever talked about WWII – never! The only stories we heard was Bob telling us he had to sleep up to his @%# in snow all across Germany and Ray telling us Bob shot down a German plane along with about 25 other people. That was about it! Corny was the site of a battle we lost; we were attempting to save a bridge on the Moselle River but we lost the battle of the horseshoe. On to Metz, where one of the 3rd Army’s toughest battle took place; it lasted three months and was a great US victory. On to Luxembourg where we took a train to Munich. We rented a car in Munich and took off to explore Germany.

Germany was a different story. WWII is not high on their list of things to talk about. Once there our first stop was Dachau Concentration Camp with just two small signs for directions. We took the tour and felt like the information might have been watered down a bit: NOT an extermination camp, they had gas chambers and ovens but did not use the gas chambers. A total of 45,000 prisoners died there, mostly of starvation and disease? They did execute 4,500 Russian officers. Stated they treated them like pigs not human.

On to Rosenheim and Berchtesgaden to visit the “Eagles Nest.” We visited the Party House that had been rebuilt after the war. Bob and Ray were there towards the end of the war. Ray managed to liberate a portion of a work of art from the basement. Tom still has it, and wanted to see the basement where it was stored. The Eagles Nest was destroyed at the end of the war along with the basement and was rebuilt after the war. Back to Munich then back to the good old USA.

We spent two and a half weeks in Europe and covered a lot of the ground that Ray and Bob did. We believe our fathers would be happy we made the trip and watched over us the entire time. September in England France and Germany we had 70 – 75  degree sunny weather except one day of rain.

I saved this for last because it was the hardest part of the trip. We visited the American Cemetery at Normandy with 9,387 graves including 45 sets of brothers and 1,557 soldiers known only to God. While there we saw the Prince of Monaco. I was taking some pictures and one of his body guards grabbed my arm and whispered NO PICTURES. The cemetery was a very sobering experience, Tom’s observation was that they should bring all the NFL players here to see the cemetery. We also visited the American Cemetery in Luxembourg where another 5,076 graves are located. It is the site of General Patton’s grave because he wanted to be with his men. The cemetery includes the graves of two “Medal of Honor” awarded soldiers – William D McGee of  Indiana and Day G Turner of Pennsylvania as well as several brothers and a father and son who were lost.

The cemeteries are perfectly maintained by the American Monuments Commission. It is sobering to think we lost a whole generation; they  made the ultimate sacrifice.

I want to share with you another experience I had just a couple of weeks ago. As I mentioned I am a Vietnam Veteran and was in Vietnam when the cease fire was signed. When I returned home my sister Joan picked me up at the airport. There was no welcome party or brass band just Joan who I was very happy to see again. About ten months ago, at the urging of several fellow Legion members, I signed up for an “Honor Flight”. On October 20, I made the trip. We left Columbus at about 6:30 a.m. with a small group of people/volunteers cheering us on. It was on to Maryland where we were welcomed by a group of people, then into three buses with a police escort and off to Washington! During the day we visited the Korean Memorial and Arlington Cemetery where we saw the Changing of the Guard with a lady WWII lady Veteran placing a wreath. We saw the new memorial for 911 at the Pentagon, and traveled to the WWII Memorial where we were greeted by former Senator Bob Dole who greeted everyone for several hours.

There were also several people in WWII uniforms and a lady in a 1944 outfit with a ton of lipstick. I was introduced  as a Vietnam vet and the lady gave me a big kiss and left a ton of lipstick on my cheek. A little later another vet saw my lipstick and asked me about it. I told him I was so dam good looking that she just grabbed me and kissed me! The same guy came back later with a lipstick mark and said we are tied. Later he had lipstick on both cheeks and just smiled and said I win!

A special part of the trip for me was the Vietnam Memorial where I located and made an etching of a veteran I knew in Vietnam. James L Scroggins and I had guard duty on New Years Eve. Three weeks later at An Saun Viet Nam he was in a light observation helicopter about to mark a spot with a grenade when he was shot and dropped the grenade in his lap. He was killed in action on the day of the cease fire.

We returned to the Baltimore Airport, had a sandwich and a veteran in a wheel chair got the mic and talked about how special this trip had been for him. He then began to sing God Bless America and everybody joined in! We landed in Columbus about 9:30 p.m. walked into the Ohio State Band, a high school band, a bag pipe group and about 800 cheering people. I looked up and there cheering with a big sign saying “Hebron Loves Its Veterans  – Jim Layton” was David Holtsberry, a fellow Vietnam Veteran. They stuck a mic in front of me and all I could come up with was it a hell a lot different than the last time. I would guess I was told thank you for your service a thousand times that day and it was wonderful. Next time you see a veteran let him know you really did appreciate his service. And never forget the millions that have kept us free.”

The ceremony concluded with a 21-gun salute by the Buckeye Lake VFW Post 1388 Honor Guard and the playing of “Taps.” 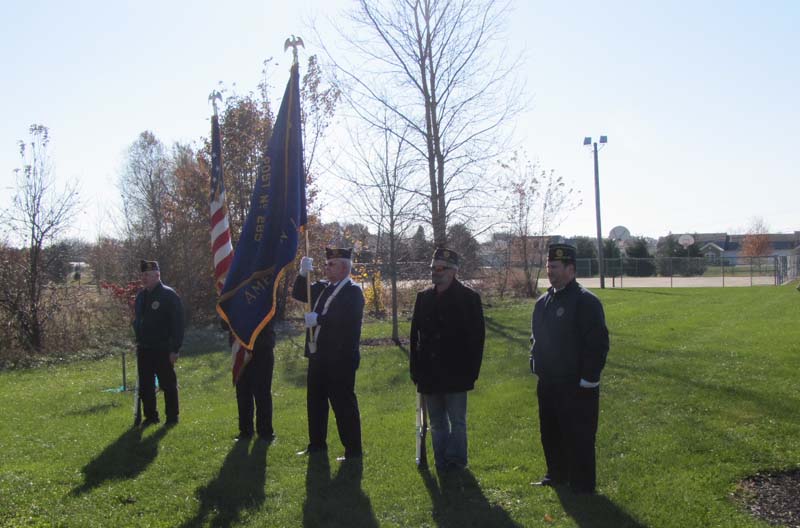 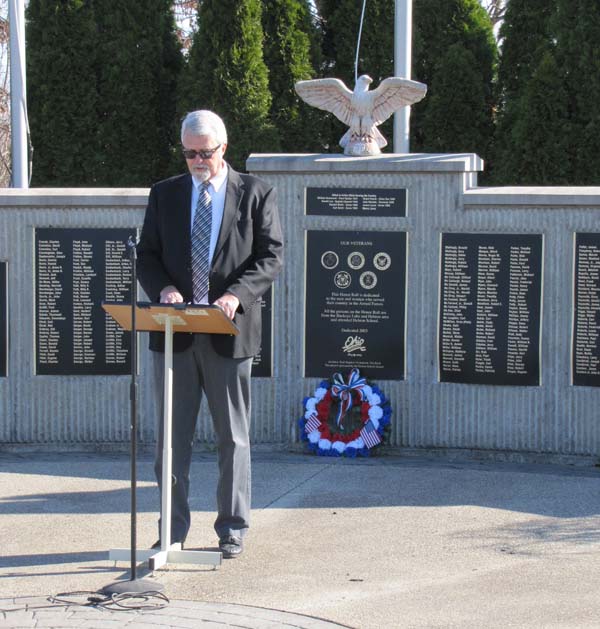 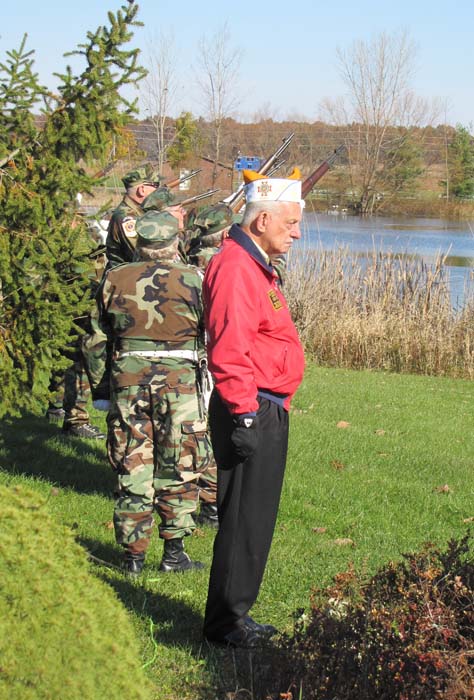