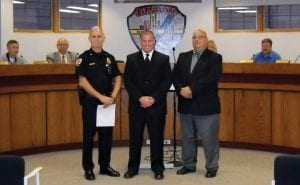 Officer Travis Shanaberg received the Medal of Merit for his efforts to curtail drug trafficking. In 2008, he discovered that a recent parolee had moved to Hebron and was dealing drugs from two separate locations inthe village. Over the next 12 months Shanaberg continued to develop leads, pursue tips, and conduct hours of surveillance.

While working on the July 4th holiday, Shanaberg, acting on fresh information, initiated a series of actions starting with a traffic stop and ending with a search warrant. A large amount of marijuana, destined for sale, was confiscated and the drug dealer was arrested.

Officer Christopher Redman received a Letter of Commendation for his actions on the night of June 17, 2009. Redman responded to the scene of a car being broken into by two suspects who fled in their own vehicle at a high rate of speed. Due to weather conditions he ended the pursuit, considering it an undue risk. Redman later canvassed the Buckeye Lake area including Fairfield Beach, Millersport, and Baltimore looking for the vehicle. His efforts resulted in the vehicle and its occupants being identified, questioned, and charged in four car break-ins that night. 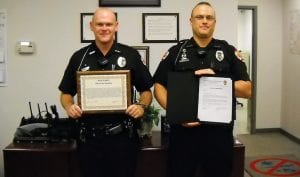 Farmer, 21, is the son of James & Paula Farmer and is a Licking County resident. He recently graduated from Central Ohio Technical College with an Associate Degree of Applied Science in Law Enforcement Technology. Farmer also graduated from the Ohio Peace Officer Training Academy, meeting all requirements for certification as a peace officer in the State of Ohio. Before being released to patrol, he must complete a 160-hour Hebron Police Department Field Training Program.