Mayor Mike McFarland made the declaration in a ceremony at the February 27 village council meeting. The Lakewood junior was honored for achieving Scouting’s highest rank of Eagle. McFarland thanked Macray, the son of Kevin and Mindy Kester, for his service to the community. For his Eagle service project, Macray organized the purchase and planting of 67 seedlings and 27 mature trees in Hebron’s Evans Park.

McFarland’s resolution also noted that Macray recently was selected as a state winner in the American Legion’s annual “Americanism and Government Test” and was awarded an all-expense paid trip to Washington D.C. and Gettysburg. During his Washington D.C. trip, Macray was chosen to place a wreath on the Tomb of the Unknown Soldier in Arlington National Cemetery.

In other business February 27, McFarland and council members thanked Village Administrator Ralph Wise for his six years of service to the village. Wise announced his resignation at the February 13 council meeting. He is leaving March 15 to become the Village of Gambier’s village administrator. Wise received a briefcase and plaque from the village.

Wise prepared a nearly three-page report for village officials, addressing “future milestones.” In the “Community Development” area, he listed two major projects underway. One is the Isaac Wiles law firm’s evaluation of the village’s zoning and subdivision regulations. Wise expects there will be recommendations for changes. The other project is the Sunny Acres Wetlands Restoration. Though a consultant has been selected, work is just starting and will extend into 2020. A FEMA grant is paying for 75 percent of the cost.

On the subject of Debt/Finance, Wise wrote that his comments last fall about the opportunity to pay off early the water and sewer bonds refinanced in 2012 in order to save consumers hundreds of thousands in interest costs is no longer so attractive. Rising interest rates have increased the interest the village is earning on its water and sewer surplus funds.

Wise also discussed six major infrastructure projects in various stages. The North Street culvert project will be completed this spring once the gas and water lines are lowered, making room for the new larger capacity culvert. The second one is closely tied to the first – North Street will be resurfaced from High to Ninth streets once the new culvert is in place.

The third one is a joint project with Union Township to resurface/rebuild Enterprise Drive (Hebron) and O’Neill Drive (Union Township) in the industrial park. The project is tied to an economic development project commitment that has been moving more slowly than expected. The North High Street sidewalk is the fourth project and is ready to go. The bid is expected to be awarded in April with construction completed in November. Replacing the culvert under U.S. 40 by the old municipal building is the fifth project. A consultant has been selected and construction is expected in 2022. The last project is extending Hope Drive to North High Street. Wise has asked Licking County to seek a Community Development Block Grant to fund construction. If awarded, construction would likely be in 2020.

On water and sewer, Wise said flow monitoring equipment has been installed at the sewage lift stations. The data will be used to see what areas have the most infiltration of surface and ground water into the sewer system. Wise said the switch to MuniLink billing software for the water/sewer bills is almost complete. The new features will be an improvement for all customers, particularly industrial ones.

Wise wrapped up this letter with, “Finally, I would be remiss if I didn’t tell you about the quality of the citizenry here in Hebron. If you have never had to live or wanted to live anywhere else, you may not know how important the people’s character have made this community. Hebron residents are kind, civil, respectful of the village staff and take pride in their town. There are months where we have no utility shutoffs because the residents take responsibility and pay what is owed. It’s been nearly three years since we’ve had to assess an unpaid bill over to property taxes. That doesn’t happen elsewhere.”

Wise summed up his comments stating, “I will miss working for you.”

Council members also unanimously agreed to purchase a new pumper to replace one of the fire department’s two aging pumpers. From an initial estimate of $670,000, Fire Chief Clifford Mason said the selection committee now believes they can get everything they want for about $540,000. The purchase will be made through the Houston/Galveston Area Council that operates like the State of Ohio cooperative purchasing program but on a national basis. All three manufacturers being considered have open contracts with the area council, eliminating the delay and expense of preparing bids locally for the truck. Delivery is expected in 13 months. Sufficient funds are available in the village’s EMS billing account that is set-aside for capital expenditures. On the recommendation of fiscal officer Deborah Morgan, the village will make advance payments to save another $15-30,000.

Council members briefly discussed the partial collapse of the former Ours Garage office. No one was injured nor was any other property damaged in the Sunday, February 24, collapse of the block wall along High Street. Wise said the property had been sold to Englefield Oil who had already applied for a demolition permit. A new, larger convenience store is expected to be built on the site.

Council’s next regular meeting is set for 6:30 p.m. on Wednesday, March 13, in council chamber at the municipal complex. 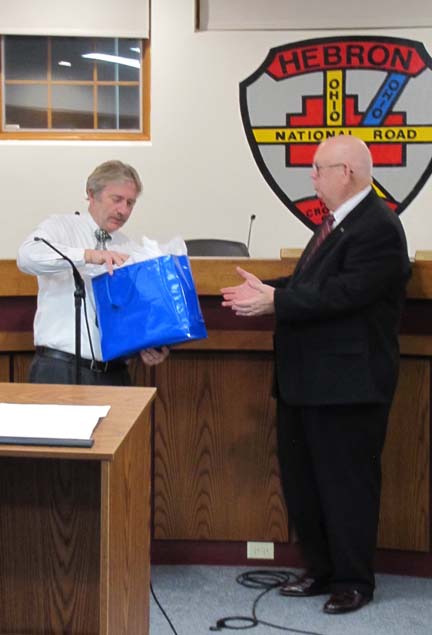 Hebron Mayor Mike McFarland presents a thank you gift to Village Administrator Ralph Wise for his six years of service. 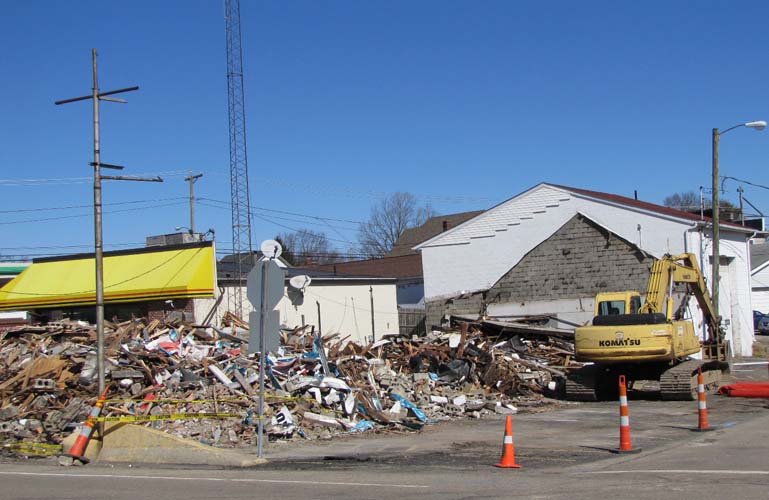 The former Ours Garage office was just a pile of rubble by early Monday afternoon after a concrete wall along High Street unexpectantly collapsed Sunday afternoon. The white building in front of the excavator has subsequently been torn down as well.  A new and larger Duchess convenience store is expected to be built on the site.