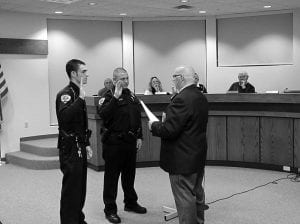 HEBRON – It took more than a year, but Hebron finally has a signed agreement with Union Township to provide fire/EMS services in the unincorporated potions of the township south of the CSX rail line.

Hebron wanted to reserve EMS billing revenue for capital improvment projects including constructing a satellite fire station in the township to improve response times. That was unacceptable to trustees who wanted to use the revenue to offset their share of operating expenses so they wouldn’t have to tap the township’s general fund to meet their obligations to Hebron.

Police Chief D. James Dean told council members that Officer Travis Shanaberg had completely revamped the Community Response Team. It now includes about 150 people from Thornville, Heath, Buckeye Lake, Hebron and points in between. The team is activated for missing children or a similar emergency that requires more manpower. “The phone trees are there,” Dean said.

Dean also requested approval to buy a new cruiser. The department tries to replace one of its four cruisers every year, but skipped last year for financial reasons. The 2011 Ford Crown Victoria will be purchased off the state bid list for $21,537 and replace a 2006 model with about 70,000 miles. Dean said the 2011 model is the last one for Crown Victorias.

He warned council members that future replacements will be more expensive since they will have to purchase new interior and exterior equipment to fit another police model, likely to be a Dodge. Since standardizing on Crown Vics, the extra equipment is simply moved from the retired cruiser to the new one. Dean asked to keep the old cruiser as a plain car to use to go to training sessions and make court runs. Its usage will reduce mileage on cruisers. His requests were unanimously approved.

Fire Chief Randy Weekly reported that the department made 78 EMS and 24 fire runs in November. Year-to-date totals are 762 EMS and 249 fire runs. He said that is about on par with last year.