HEBRON – Village Council members learned in the last week that the village’s administrator is resigning and the mayor won’t seek reelection.

Village Administrator Ralph Wise submitted his letter of resignation to Mayor Mike McFarland at the February 13 council meeting, providing a 30-day notice of his resignation effective March 15. He wrote, “I have thoroughly enjoyed working with you, the Village Council, our village team and our residents to carry-out the policies developed by the elected officials. There have been numerous achievements the village has accomplished as a team in the past six plus years and there are many more on the horizon that this team can carry forward into the future.”

Wise became Hebron’s fourth village administrator on October 1, 2012. The Ohio native moved 927 miles east on U.S. 40 to take the Hebron job. He had served 4-1/2 years as the city manager of Russell, Kansas. U.S. 40 runs through the 4,500 population city that’s just off I-70. In Ohio, Wise had served  five years as Director of Public Service and Safety for the City of Fosteria before moving to Kansas. He and his wife, Teri, who is the Baltimore’s village administrator, moved back to Ohio to be closer to family. Wise resigned to accept the village administrator’s post at the Village of Gambier in Knox County. Gambier is the home of Kenyon College.

One week later at Village Council’s February 20 combined committees meeting, McFarland announced at the end of the meeting that he will not be seeking reelection this November. “I’ve enjoyed it and I continue to enjoy it,” McFarland told council members. “I’ve served this community in one capacity or another for 45 years.” He said he and his wife have four grandchildren – two in central Ohio and two in Pennsylvania – and they want to spend more time with them.

McFarland said he is willing to discuss the job with anyone interested in being mayor. “I hope the person who follows me does a better job,” he added. “I’ll be looking for what’s next. I will cheer on the next mayor.”

At last week’s council meeting, Wise reported that the Columbus Business Journal listed Hebron as the 10th fastest growing village in central Ohio based on an estimated four percent population increase from 2010 to 2017. Wise said the Hebron was ranked No. 12 out of the 23 villages in the Columbus area last year.

Wise also reported that work on the North Street culvert replacement will resume next week. The project to expand the capacity of the culvert under North Street  to move stormwater more quickly through the village started last fall. A Columbia Gas line and a village waterline must be relocated before the project can be completed. Most of the cost is being paid by a Ohio Public Works Commission grant and loan.

Council also approved a resolution accepting the latest estimate of $771,000 for the North High Street sidewalk project. Hebron must pay 20 percent of the estimated cost ($154,000) and 100 percent of any costs exceeding the estimate. ODOT wanted the legislation and the $154,000 check before March 1, so the project can be bid in March. Construction is expected in May – November. Wise noted at the committees meeting that the South High Street sidewalk project came in under the estimate.

Council members also selected Hull & Associates, Inc.’s Licking County office – formerly known as Jobes Henderson – as the design consultant for the U.S. 40 culvert replacement project. An ad hoc village committee interviewed three of the four engineering firms that responded to the request for qualifications. That process was required after the original project cost estimate ballooned from $250,000 to $600,000. Construction is currently scheduled for 2022 but could happen in 2021 if it can be designed without requiring additional right-of-way.

Council members discussed two possible approaches to creating a leave donation program for village employees during their combined committees meeting. Council members initially favored a simple employee-to-employee exchange where an employee who needs leave is dependent on other employees voluntarily giving up some of their own leave. That plan is considered to be simpler to administer than an employee leave bank proposed by Fire Chief Clifford Mason. However, as the discussion continued, concerns about hard feelings and possible retribution in a person-to-person program was eroding some of its initial support. Council members will continue to consider both options.

Wise also reported that the village’s contract for residential waste collection expires at the end of June. Since he couldn’t find a clause that allows the contract to be extended, the village needs to get started on the bid solicitation process. “I hear zero complaints (about current contractor, Adkins Disposal Services),” Wise reported. Council members agreed.

McFarland encouraged council members to check out the Claremont (CA) Pie Festival webpage. He said the one-day festival now in its fifth year includes bakers and makers demonstrations, a pie baking contest, food vendors, a classic car show, a pie eating contest, live music and childrens’ activities. “No one in this area has a pie festival and everybody loves pie,” McFarland said. He added that the Hebron Lions Club is interested in helping with such a festival. The Hebron Music & Arts Festival, which began in 2008, has struggled with poor attendance and weather. Anyone interested in helping the prospective festival get off the ground should contact McFarland.

Council’s next regular meeting is set for 6:30 p.m. on Wednesday, February 27, at the Hebron Municipal Complex. 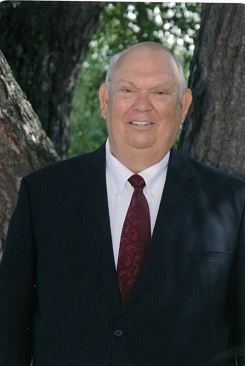 Hebron Mayor Mike McFarland announced this week that he won’t seek election to a second term this November. He also serves as Board Chair of GROW Licking County. Courtesy photo.