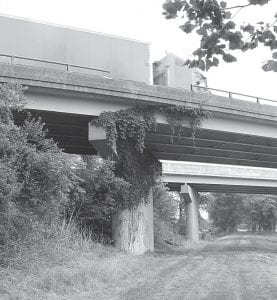 ODOT District 5 representatives say there’s no danger of falling debris from the damaged I-70 overpass spanning the walking trail next to Canal Road near Hebron. The damage was caused by an impact, not deterioration. It’s scheduled to be repaired soon. Beacon photo by Scott Rawdon.

HEBRON- Pedestrians on a walking trail next to Canal Road from Hebron should be careful when walking beneath the I-70 overpass, said the Union Township Trustees Monday night. Concrete fell from the south side of the eastbound overpass, presumably onto the trail. As of Tuesday morning, a section of the guardrail was missing as well.

“It definitely needs attention,” said Union Township Police Chief Paula Green, who was substituting for Township Clerk Amanda Griffith Monday night. Green said Ohio Department of Transportation representatives believe the overpass is safe for traffic, but she was worried about more debris falling onto the path.

Jim Spain, ODOT District 5 acting public information officer,said the damage was caused by a wide load truck impacting the rail, and there is no danger of any more debris falling from the bridge to the walking path. He assured the bridge is not deteriorating or randomly dropping concrete.

“Everything is safe and sound,” said Spain. “It’s not falling apart.” He added that the overpass is scheduled to be repaired soon.

In other Union Township news:

+ Trustee Jack Justice said the township appropriated about $180,000 for township road maintenance, but many projects are out to bid and others are still in the planning stages. He wasn’t ready to cite exact locations or costs. The trustees will try some experimental paving techniques to reduce cost and, particularly, reduce dust tracking in subdivisions.

+ The trustees accepted a bid from Tipton, Indiana based Renewed Performance, Inc. to refurbish a township firetruck for $86,772. Work will begin on the truck in six to eight weeks and take two to three months to complete. Renewed Performance submitted the only bid. The refurbishment should extend the truck’s life by 15 to 20 years, the trustees said previously.

+ The township and neighbor Ed Parrish removed a crumbling concrete bridge at Buckeye Park Avenue, a small rural road, and replaced it with a solid surface over two culverts. “Everybody’s happy,” said Trustee John Slater, who said work was delayed slightly by questions about the bridge from the county level. Licking County Subdivision Inspector Ty Yoho said that any bridge 10 feet wide or more is maintained by the county. Anything bridge narrower is the township’s responsibility. Yoho said the county provided Union Township with some information about the bridge but never objected to its removal.

Parrish believes the bridge was a safety hazard. He said previously that only flood waters flowbeneath it and a pair of pipes covered with gravel, dirt, and asphalt would accommodate the flow. Parrish had an excavator in the area and offered to dismantle the old bridge as a “goodwill gesture.”