Dawes has its day 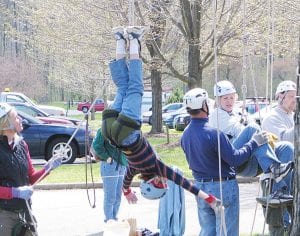 JACKSONTOWN – It was Jaz Livingston’s third time to rope climb a gigantic tree at Dawes Arboretum and he wasn’t ready to come down for a while. Jaz’ mother, Gloria, said she and her son often bicycle through Dawes and were happy to learn of last Saturday’s Arbor Day celebration on one their frequent visits. The rope climbing event, sponsored by Tree Climbing USA of Fayetteville, Ga., is one of the major draws to Dawes’ annual Arbor Day celebration, which attracted about 1,700 people this year.”

Next year, I’ll gather up some of his buddies and bring them,” said Gloria Livingston.

“Our numbers were okay this year,” said Laura Kaparoff, Dawes’ public relations director, who added the event usually draws about 2,500 people. Saturday’s cool weather kept attendance on the low side, although the sun started to shine later in the day. About 90 people signed up to climb the tree, she said, and many more enjoyed all the day’s exhibits–including bee hives and Arbor Day Wheel of Fortune–and the free trees given away by the arboretum. 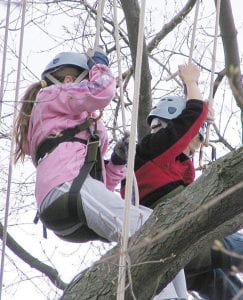 Even the most arden environmentalist will admit that for most people, Arbor Day as a holiday ranks right up there with Thomas Jefferson’s Birthday and National Maritime Day. But, Dawes’ Arbor Day celebration maintains a strong turnout every year.

“Lots of people have strong feelings for the environment,” said Kaparoff. “They want to make sure we don’t ruin what we have.” She said global warming is also a major issue. Whether people believe in global warming or not, “many people still want to know what they can do.”

Dawes historian Dave Vermilion wrote that Arbor Day was founded in Nebraska by newspaper editor and farmer, J. Sterling Morton. A Michigan native, Morton headed west in the early 1800s to carve a new life from the sparse Nebraska Territory. He saw the potential for establishing agriculture and horticulture in Nebraska’s grassy plains, and he encouraged the wide-scale planting of trees. As time passed, Morton enjoyed a strong political career, including two terms as Territorial Representative, Secretary a nd Acting Governor of the Territory of Nebraska, and US Secretary of Agriculture. Yet , wrote Vermilion , Morton’s most important and enduring contribution was Arbor Day. Morton offered a resolution to fellow members of Nebraska’s State Board of Agriculture advocating a day of tree planting for public good. 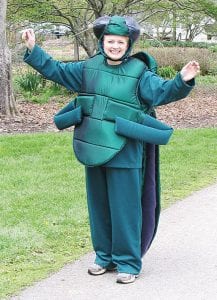 According to the National Arbor Day Founda tion, the first Arbor Day was April 10, 1872. Prizes were offered to counties and individuals for planting the largest number of trees. It was estimated that more than one million trees were planted in Nebraska on the first Arbor Day.

Arbor Day was named a legal holiday in Nebraska on April 22, Morton’s birthday. During the 1870s, other states passed legislation to observe Arbor Day, and the tradition began in schools nationwide in 1882. 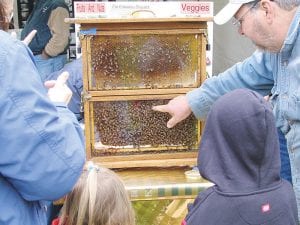 Today, the most common date for the state observances is the last Friday in April, but several state Arbor Days are at other times to coincide with the best tree planting weather, from January and February in the south to May in the far north.