Guess it wasn’t a no-brainer! 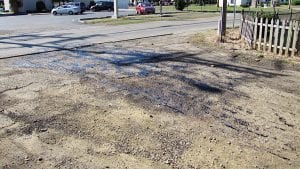 Here’s Stewart Avenue at Ohio 79 on Monday morning just before paving. There’s a smattering of tack coat for a few feet and a surface covered with loose dirt, stones and debris. Beacon photo by Charles Prince.

Three weeks ago we wrote here about our concerns about how Buckeye Lake streets are being repaved. Our concern arose when we saw that Chemcote, the village’s contractor, wasn’t applying a bond or tack coat to the existing surface nor cleaning the roadway in front of the paver. Both are critical steps to get the new asphalt to stick to the existing surface. That’s particularly important when the new layer – two inches compacted to about one inch – is so thin.

Applying a bond or tack coat and “thoroughly” cleaning the existing surface are basic Ohio Department of Transportation specifications and represent industry best practices. Asphalt Institute publications echo ODOT specifications for a bond coat and “thoroughly” cleaning the existing surface. The Asphalt Institute recommends using a vacuum broom truck to pick up dust and loose particles. If one is not available, a rotary power broom “can be used.” Chemcote uses a rotary broom to clean up after the roadway is ground down, but not before paving.

It appears that it wasn’t a ‘no brainer’ after all as little has changed. A token amount of tack coat is being applied at some intersections. On Monday, it was a single 6-8 foot wide pass for about 20 feet from Ohio 79 on Everett and Stewart avenues. It wasn’t uniformly applied nor did it cover the entire width of the street or the joint where the new asphalt meets Ohio 79. As for ‘thoroughly’ cleaning, it was business as usual with the new asphalt going down over loose dirt, grindings, gravel and other debris. No effort was being made to remove loose particles, but a Chemcote employee was observed sweeping loose material ONTO the roadway in front of the paver. I suspect they would pave right over a flattened opossum if it was in the roadway.

I grew up in West Virginia where we had a name for this practice – election blacktop. That’s when elected officials lay down a thin layer of asphalt over whatever is there just before the election to impress voters. It generally broke up quickly, but by then the votes had been cast.

Three weeks ago Buckeye Lake officials had an opportunity to insist that Chemcote meet basic ODOT specifications and industry good practices. They failed to do so and their failure will cost residents dearly.

Yes, our repaved streets look great if you don’t look at the edges. The smooth ride is welcome relief after months of enduring trench ruts, pot holes and loose gravel. But it will be short lived. If we have another snowy or very wet winter, we’ll start seeing chunks of new asphalt breaking off. It will start on the generally base-less edges and spread from there. After two winters, our repaved roads will look a lot like they did last winter

We will have spent some $722,000 – a good chunk of it other people’s money thanks to the two grants awarded to the village – and have little to show for it. Unfortunately, the next time property owners will be paying most of the tab. It’s doubtful that grants will be available to redo a bungled job. And it will be very expensive. It’s likely to cost about $1 million to do the job right which includes adding aggregate berms to streets below surrounding grade. It would be even more expensive to build up below grade streets so storm water runs off the street rather than on to it.

Our current $722,000 expenditure comes pretty close to that $1 million or so do-it-right price tag, but thanks to this botched opportunity we will be starting back at zero.

A one mill property tax in Buckeye Lake Village raises $45,590 per year. To raise $1 million over three years will take a 7.3 mill levy. That costs the owner of a $100,000 home an extra $224 a year. Even waiting five years and enduring crumbling streets for several years will require a 4.4 mill levy. That’s still an extra $135 per year for a $100,000 home. It’s doubtful voters would approve either levy. After all it took several tries to approve a one mill levy for street lights.