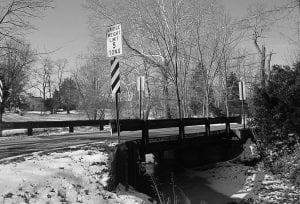 Last week, the Licking County Engineer’s Office set a five ton weight limit on this bridge at 3532 Beaver Run Road, after discovering that its I-beam support structure is deteriorating. The bridge is about one-half mile east of Gale Road. The Engineer’s Office is responsible for all bridge repairs on county and township roads. Union Township road supervisor Dave Cable said Monday night that no time line has been set for its repair. He added that it might be closed pending repair after a more thorough inspection. Beacon photo by Charles Prince.

Trustees invited Evers to Monday night’s regular meeting to describe Grow Licking County CIC and explain to them why the township should invest in the organization.

Grow Licking County CIC is a non-profit organization with a board of directors from both the public and private sectors serving as the main economic development agency for all of Licking County and its municipalities. Its mission is to provide a single, comprehensive resource to help business expand or relocate to Licking County. Evers describes it as the “front door of the community,” welcoming development, connecting resources and increasing opportunities. He said it also strives to be a “one stop shop” where potential developers can obtain consistent information on nearly any development site in Licking County.

“It’s a question of investing in the community’s future,” said Evers, “defined by the township boundaries as well as the county boundaries. This is a collaboration.” He explained that joining Grow Licking County isn’t a matter of “I’ll give you X amount of money and I expect X in return.” Evers said the more investors there are in Grow Licking County, the better the county can attract economic development, which improves life for all Licking County entities. “If more people are hiring, that will benefit (Union Township) in the long run,” he said. Also, if a developer is interested in a specific Union Township site, Grow Licking County can handle the marketing for the township. He said the organization has vastly more marketing resources than any one Licking County township or municipality.

“Ultimately, it’s up to every investor to define the value,” said Evers. “We’re doing this with a long term and broad community view. Do you want to be part of the effort to enhance economic opportunity across the county? The people who put it together saw a very big outcome. Not specific, but a larger community benefit. That’s the only way this model can be successful. We’re already incorporating Union Township into the scope. We’re not doing that to say, ‘Here’s your bill.’”

Evers said generally Grow Licking County asks for a threeyear commitment, and the business or political entity can decide for itself how much money to commit each year. “There’s a broad range of investors and a broad range of investment,” he said. Grow Licking County cooperates with larger economic growth agencies, such as Columbus 20/20, which searches globally for businesses to locate or expand to Central Ohio.

Currently, Grow Licking County has nearly 30 public and private investors, who contribute anywhere from $100 (Granville Rotary Club) to $50,000 (Licking County Commissioners) per year. Most investors contribute roughly $5,000 or $10,000 per year.

Wednesday, Black said he hopes the township joins Grow Licking County but no commitments are made. He said trustees also have to decide how much the township can afford to contribute. “There’s not a number at all at this point,” said Black. “We stand to have some decent development potential in the future,” and he believes Grown Licking County can help the township make the best of it.

• The township will hold a public meeting at 6:30 p.m. on Tuesday, March 25, at the Union Township Complex to discuss the electricity aggregation issue on the May 6 ballot. In January, trustees approved a resolution selecting Trebel, LLC as its aggregation consultant. The firm, at no cost to the township, will publicize and explain the ballot issue to voters.

If voters approve the measure, Trebel will then seek bids from all qualified electric suppliers in Ohio to get the best deal for township residents. “The public needs to know about it,” said Joe Garrett, aggregation specialist with Trebel LLC. “It’s their project.” He said he supports freedom of choice and if some residents don’t want to switch from AEP they could optout at any time without a penalty. Trebel will also publicize and educate voters about the issue. Only AEP customers may participate. “It’s not a magic pill, but it does save some money,” he said.

“It appears they’re doing it themselves,” he said.

Trustee Charles Prince, who is also president of Buckeye Lake for Tomorrow, assured Slater that the volunteer group has no regulatory authority. He said BLT recently wrapped up an Ohio EPA grant to develop a plan to reduce nutrients in the lake. The primary concern is phosphorous which is a critical nutrient for blue/green algae.

Prince said BLT has been testing water in the lake and the streams flowing into it for several years, looking primarily for phosphorous sources. “We don’t have any smoking guns but one,” he said – Canadian geese. He said there could be as many as 25,000 geese in the Buckeye Lake Watershed. Prince said Buckeye Lake for Tomorrow is not saying agriculture is responsible for the phosphorous or the resulting algae. “In general, the water that’s coming into the lake is better than what’s there,” he said.

After being assured by Township Administrator Paula Greene that the proposed meeting room rules were still a work in progress, trustees unanimously approved them.

Application must be made at least 72 hours prior to the event. The meeting room is not available for social gatherings, political activities or ”religious or proselytizing functions.” Use is free but reservations aren’t taken more than three months in advance.

Trustees’ next meeting is set for 7 p.m. on Monday, March 17, at the township complex.