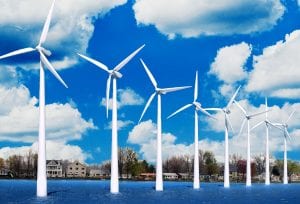 BUCKEYE LAKE – Concerns about algae in Buckeye Lake are being addressed.

Thanks to the Obama Administration’s focus on “ green energy” and some leftover American Recovery and Reinvestment Act (stimulus) funds, lake area residents won’t have to worry about algae or warning signs scaring away visitors.

Details of the mitigation plan, put together very quietly by federal and state officials, are just becoming public.

Buckeye Lake State Park Regional Manager Hal Carper called it a “fortuitious convergence.” He explained, “ The feds had some leftover Section 1603 funds (renewable energy projects) f rom the stimulus that they wanted to spend this fiscal year (ends October 31, 2012) and we had a ‘shovel-ready’ project. I want to thank U.S. Senator Sherrod Brown (D-Ohio) for fighting to get that money spent here.” 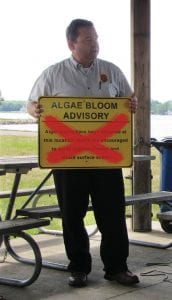 Brown secured an earmark from the U.S. Department of Energy (DOE) for $5.6 million to purchase and install up to 69 Hummer H9.0-20kw windgenerators from Anhui Hummer Dynamo Co.,Ltd of Chaohu City, Anhui Province, China. The Chinese manufacturer was the only one to guarantee that the stimulus money would be spent by the October 31 deadline. The towers for the windmills will be fabricated from American steel at a Steubenville area manufacturer.

“At least $1.4 million for the towers and another $0.8 million for installation will go to American companies,” a spokesperson for Brown said. “That’s pretty good.”

Each windmill will power triple diaphragms producing 1,800 cubic feet per minute of air at peak production. That compressed air will be released underwater via fine bubble membrane diffusers.

Kelp and ODNR’s consulting hydrologist Spencer Sparge Ph D. are plot ting diff user per for mance and anticipated dissolved oxygen levels across the lake so the 69 wind-generators can be installed in the most efficient locations. At this point at least 30 will be installed along West Bank, most of North Bank and part of South Bank. “West Bank installations will be the most efficient,” Sparge told The Beacon.

Aeration efficiency drops significantly when air lines exceed 2,000 feet, he added, which means wind-generators will have to be staged down the length of the lake. Bays, coves and major channels will also need a nearby wind-generator. Red push pins on the map below depict the tentative locations for 62 of the 69 wind-generators.

The prospect of at least 30 windmills on 90-foot plus steel towers just off North, South and West banks isn’t sitting well with some waterfront residents. Snowbird Tory Wolfe asked why residents weren’t given advance notice of the project.

“It couldn’t have been done otherwise,” Carper explained. “ That federal money was going to get spent somewhere to stimulate the economy,” he added. “We had to be ready to go.”

“I can’t see the sunsets, but those damn windmills are going to ruin them for many waterfront residents,” Wolfe complained.

“It won’t ruin the sunsets,” countered Carper. “There will be new sunsets with the rotor blades creating a light show daily at dusk. Besides the same old sunset can get boring. It’s like looking at the same person in bed, night after night, year after year.”

State officials were quick to counter their concerns. Ohio State Parks Chief Dane Paine said the “soothing whooshing” sound from the windmills will make lakefront living more like oceanfront living. “People pay millions to live next to the ocean,” he pointed out. “Besides it will be like having a topof the-line Bose white noise machine in every home.”

“Green is the new cool,” Paine added. President Obama may dedicate the system this fall, he said. DOE Secretary Steven Whu said in a statement, “Sustainable living depends on green energy.” A spokesperson for Whu said, “ It may take Buckeye Lake residents some time to understand the new paradigm.”

Carper added that propertyowners will have the added assurance that the concerns about algae have been eliminated with the federal government picking up the tab. He hesitated a bit when asked about funds for maintenance.

Hummer Managing Director Tuf Luc said the H9.0-20kw’s are covered by a 24-month warranty. After the warranty period, Carper said Ohio State Parks will be looking to local sources for maintenance expenses. Licking County Auditor Michael Schmidt confirmed that he and his Fairfield County counterpart have been talking with state officials about how to come up with the $400,000 – $700,000 per year to maintain the wind-generators, diaphragms, air lines and fine bubble diffusers.

Paine pointed out some additional benefits beyond algae control from the windmills. Most residents with docks will be able to retire their bubbler systems. Though algae isn’t an issue during the fall and winter, the windgenerators will operate year round to keep the air diffusers from clogging.

“I doubt we’ll see ice on the lake again,” he said. That should please some waterfront residents since they won’t have to put up with noise from motorcycles and ATV’s racing on the ice.

Paine also announced that the Division of Wildlife has agreed to ban duck hunting on the lake to protect the wind-generators from errant buckshot. “That’s just great,” Wolfe said. “After we’ve complained for years about our windows being sprayed with buckshot to no avail, they finally come to their senses to protect their precious windmills.”

“We don’t like to reduce recreational opportunities (duck hunting and ice fishing),” Paine said. “But here we’ll be significantly increasing fishery opportunities.” He pledged to add Buckeye Lake to the annual and sometimes semiannual trout stocking program. “I am confident that we will have the dissolved oxygen levels necessary to support an ongoing trout fishery.”

Neither Paine nor Carper mentioned electromagnetic interference (EMI) in their first discussion with The Beacon. A study by Dipak L. Sengupta at the University of Michigan’s Department of Electrical Engineering and Computer Science confirmed that the rotating blades of a wind-generator will interfere with television reception. That study also found, “To some extent, all electromagnetic systems are affected…” which would include cell phones, computers and wireless internet.

That’s a huge issue to most businesses, including The Beacon, and nearly all residents. Paine referred The Beacon’s questions about EMI to DOE. A spokesperson for DOE’s Office of Health, Safety and Security said, “EMI is not really that big of a deal anymore. Inexpensive filters are readily available.”

An internet search found EMI filters available at prices ranging from about $50 to several hundred dollars depending on their performance and ease of installation. Tuf Luc of Hummer said most EMI filters are manufactured in China and offered to make a wholesale purchase if residents or project managers could agree on one model. Purchasing several thousand EMI filters in China could get the unit price below $100 for a top model, he said. Filters for cell phones are little trickier. One model will not fit all phones, Luc explained.

It appears that residents will have to pay for their own filters. “Per statute, individuals may not directly benefit from the Recovery Act, including Section 1603,” said a spokesperson for DOE’s Office of Energy Efficiency & Renewable Energy. Paine said the state might be able to come up with $10,000 or s for a very limited grant program to help low-income residents buy filters. Details will be in The Beacon when available.

The fast moving project surprised the directors of Buckeye Lake for Tomorrow. The volunteer group has been working for nearly three years to improve Buckeye Lake’s water quality.

“We’re pleased with the federal help,” President Dave Levacy said. “We’re a little concerned that it’s making it sound too easy. We have some concerns about the long-term sustainability of saturation aeration. BLT will continue to develop our multi-tool watershed plan.”

“Carp Fest might turn into a Trout Fest,” co-chair Charles Prince added. “It would certainly make it easier to get judges for a Trout Cook-off.”

NO WIND (Neighbors Opposed to Windmills Installed Near Domiciles) is holding an organizational meeting at 2 p.m. on Sunday, April 1, at the Crystal Ballroom in Buckeye Lake. Everyone is welcome.