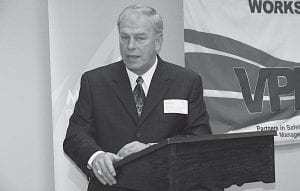 HEBRON- In the same way rising gasoline prices affect everything from shipping costs to the price of produce, Ohio Governor Ted Strickland worries that unregulated electricity costs may force Ohio companies similar to Hebron’s Momentive Performance Materials, a Connecticut based global quartz and ceramics producer, to lay off workers or shut down entirely.

Strickland visited Momentive’s Hebron facility Dec. 14 to tour the plant and promote his Energy, Jobs, and Progress Plan, which he says will ensure affordable energy prices and enhance energy industries in Ohio.

Strickland spoke to Licking County community members and media in a company conference room following his tour of Momentive. He said that in 1999, Ohio moved toward deregulating electricity–or removing a government mandated price cap–under the belief that energy producers would flock to Ohio, and the resulting competition between them would hold electricity costs down. But, he said, competition never happened between suppliers and the rates remain capped. “When you offer consumers a product with no choice of who they buy from, you don’t have a market, you have a monopoly,” said Strickland in a press release. “And, prices don’t go down, they raise even higher.”

Strickland said ever since 1999, the government has recognized the need to keep electricity rates predictable stable for consumers, and the Public Utilities Commission of Ohio, or PUCO, has maintained a government mandated cushion of rate stabilization. “And, it is that cushion that has kept rates paid by consumers and companies from rapidly escalating,” he said. But, rate stabilization expires at the end of 2008.

Many of Ohio’s largest employers, said Strickland, have expressed concern that deregulation without rate stabilization will cause skyrocketing electricity prices and drain Ohio’s economy. He said when rate stabilizations ended last summer in the State of Maryland, electric bills jumped 72 percent. “We don’t want to see that happen in Ohio,” said Strickland.

“Let me say, I do not see us going back to a fully regulated system,” he said, but he would like Ohio to move forward with a “carefully crafted” system to ensure price stability and a reliable supply of electricity.

But, several Ohio energy providers oppose Strickland’s plan. According to Cleveland. com, representatives from Akronbased energy provider FirstEnergy are working hard to block government regulation, and they hope Ohio will allow market competition to determine energy costs as of Jan. 1, 2009. Energy providers claim that Strickland’s bill will prevent a competitive market from developing in Ohio because it will keep energy prices artificiallylow.

Ohio Representative Dan Dodd (D-Hebron), who was present for Strickland’s visit, agrees with the governor’s plan. “I have been a strong supporter of (Strickland’s) energy bill since he introduced it several months ago,” he said. “I believe the legislation provides a measured, responsible approach to fixing the failed system of deregulation.” While the people who pushed the electricity deregulation plan almost a decade ago should be commended for their efforts to bring lower energy costs to Ohio, said Dodd, it’s the responsibility of this General Assembly to admit that this effort was and is a failure. He believes the plan proposed by Strickland, which unanimously passed the Ohio Senate (which added several provisions), will prevent massive energy cost increases.

Dodd said that as a member of the House Alternative Energy Committee, he also believes the alternative energy portfolio included in the “Energy, Jobs and Progress Plan” will allow Ohio to produce environmentally-friendly energy and focus its resources on becoming a destination for investment dollars in alternative energy production.

Licking County Chamber of Commerce President Cheri Hottinger, also present for Strickland’s visit, said the governor’s visit – or any visit by a visible political figure – is good for Licking County’s economy. “Anytime you can get an elected officialto come and visit your community, it’s a plus,” she said. “If they tour a specific company and see what the company does, it’s even a bigger boost.” Familiarizing public figures with the different types of Licking County companies and the products they produce helps them become more aware of what Licking County has to offer, she said. It also helps to build relationships which are very important when a company needs help from the government, said Hottinger. “Because we have so many great companies here that do things that no other companies do around the US and in some cases the world, the governor or other elected officials can be ‘proud parents,’ and use us as a good example around the state and the world,” she said.

The challenge is simply to convince public figures to visit. “We invite them every chance we get,” said Hottinger. “The chamber just had Senator Tim Schaffer in for a visit to hear some concerns of local businesses and to hear what projects we are working on.” She said she and Licking County Port Authority Executive Director Rick Platt visited Lt. Governor Lee Fisher to update him on the economic development projects in Licking County. “Doing things like this can only help Licking County showcase what we have and build those relationships that are so crucial,” said Hottinger.

“When it comes to bringing Governor Strickland to the area more often, believe me, I am constantly submitting requests for him to do so,” added Dodd. “I am certain that Governor Strickland likes coming to Licking County and I will continue to encourage him to visit whenever he can.”