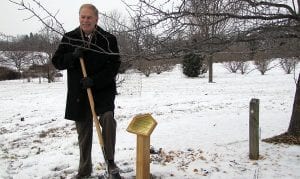 JACKSONTOWN – Ohio Governor Ted Strickland said he was following in the footsteps of Ohio Governor James M. Cox, who was the first Ohio Governor, and person, to dedicate a tree at The Dawes Arboretum.

He also happened to be Strickland’s favorite Ohio governor. “Cox was the greatest governor we ever had,” said Strickland, who added that he aspired to govern like Cox in many ways.

Cox dedicated a burr oak at Dawes on June 10, 1927. Strickland dedicated a crab apple tree Dec. 8. He said the crab apple tree, which is roughly 10 years old, may look “tangled” by its nature, particularly on Wednesday’s cold and snowy afternoon, but it’s also beautiful in that it provides food and shelter for birds and other creatures during the warmer months. The tree was already planted.

Strickland was the one hundred and third person to dedicate a Dawes tree. Dawes Historian David Vermillion said Strickland joins past governors such as John Bricker, George White, Frank Lausche and Bob Taft to become the seventh Ohio governor to dedicate a tree at the Dawes Arboretum.

Dawes founder Beman Dawes was inspired to develop a tree dedication program at the arboretum after seeing a century-old tree that was planted at a country estate in England to commemorate the allied victory at the Battle of Waterloo.

The Arboretum Board of Trustees chooses tree dedicators at Dawes to honor individuals or groups with outstanding achievement in the stream of human history or events of significance to the arboretum.

A bronze plaque located at the base of the selected tree shows who the tree was dedicated to, dedicated by and his or her accomplishments. Notable dedicators include Colonel John H. Glenn Jr., Jesse Owens, Jack Hanna, and Orville Wright.

Although some of the dedicated trees haven’t survived over the years, Vermillion said those trees were replaced and the burr oak Cox dedicated continues to grow tall and strong on the arboretum’s north end.